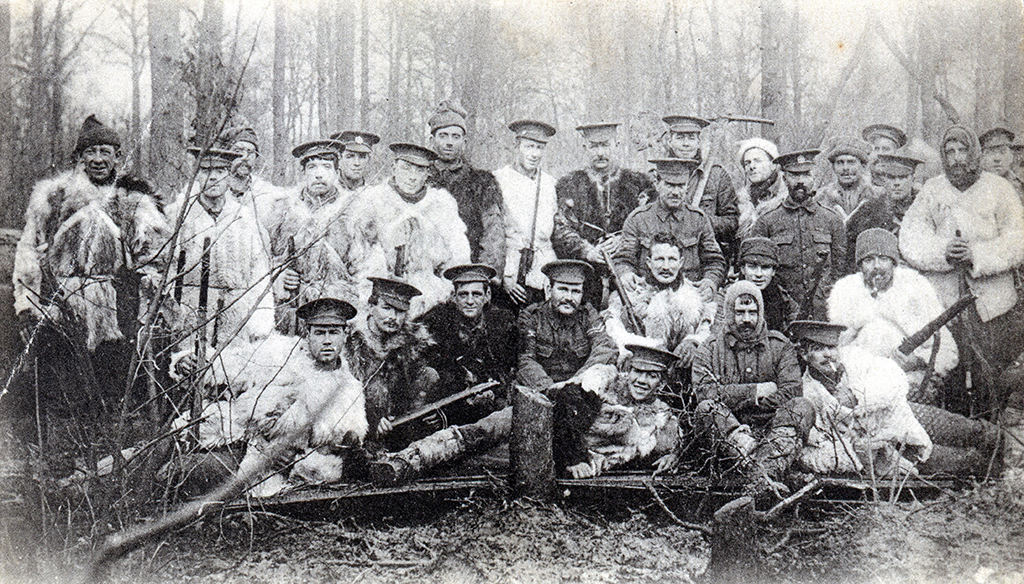 1. It was instigated by the Germans

In the lead up to Christmas, German soldiers on various parts of the British sector of the front were seen to be placing lanterns on their Trenches, in some cases Christmas Trees, and reports of carol singing were also received. Then on Christmas Day wooden signs could be seen on the German parapet saying ‘Merry Christmas’ and then German soldiers emerged into No Man’s Land, calling for a Truce. Many British soldiers were initially suspicious of this, but gradually the Truce spread. In some cases it lasted a few hours, in others it lasted several days. Thousands and thousands of men on both sides took part.

2. It was largely on the British sector

Despite some recent films, the Truce really only took place on the British sector of the front. Whether this was because British soldiers felt some natural affinity with the Germans due to shared history and culture is difficult to say. On the French front there was little desire for fraternisation, and while there were some isolated examples of a Truce, most were related to burying the dead after recent fighting.

3. No Football was played

Again, despite cinema and a recent supermarket advert, evidence shows that there were no football matches in No Man’s Land on Christmas Day 1914, between British and German troops. The nature of the battlefield, with shell holes and barbed wire, made such a match difficult anyway, but footballs were used for physical training when out of the trenches, and it is unlikely if any were available. Letters from the time show a desire to play matches, but the only example that comes anywhere near is on the front of 1/6th Cheshires where what was described as a ‘kick about’, featuring more than 100 soldiers of both sides, took place. So no organised match, and Germany did not win!

4. Peace on Earth? It was about burying the dead

For many soldiers in the front line area there was a practical reason for a Truce: to bury the dead. On the British front in Flanders there had been some local attacks on 19th December 1914, and the unburied bodies of the dead were lying out in No Man’s Land. The smell was terrible, and soldiers wanted to bury their comrades, so one of the most common activities that day was not to share your rations with Fritz, but to find and bury your dead.

5. Did they swap gifts with each other?

In many cases soldiers did give each other gifts once the Truce was active. Opposing soldiers swapped cap badges and buttons, food and drink, and some took photographs of each other, as at this stage of the war personal cameras were not banned. The 1/6th Cheshires cooked a pig in No Man’s Land and offered to share it with their German counterparts. German soldiers brought a barrel of beer to the men of 2nd Royal Welsh Fusiliers, for which they gave plum puddings in return. But the beer was of poor quality to the hardened Welsh regulars so it was not a popular present!

6. The Truce was not universal

Not every German unit wanted a Truce, and not every British unit agreed to participate. British soldiers had witnessed many examples of the Germans implementing ‘ruse de guerre’ (tricks of war) during the campaign from Mons to Ypres, and as such they did not trust the motives for the Truce. Some units were proud of their martial reputation and did not want to be seen to fraternise, and even in sectors where there was a Truce, some soldiers did not take part: having lost mates or family members in the war, as well as the diet of anti-German propaganda that had started on the outbreak of war, they perhaps had little inclination for it.

Along the British front on 25th December 1914 more than seventy British and Commonwealth soldiers were killed or died of wounds. Of these 32 are commemorated on the Le Touret Memorial, Ploegsteert Memorial or Menin Gate, and have no known grave. With shelling, random sniper and machine-gun fire, for many soldiers Christmas Day 1914 was a typical period of trench warfare with the usual losses.

8. There were many remarkable coincidences

Men of the London Rifle Brigade who took part in the Christmas Truce were Territorial soldiers from the City of London. Before the war many waiters in London hotels were German, and a large proportion of men’s barbers were German too. One veteran recalled meeting a German soldier who used to cut his hair, in No Man’s Land that day; a few months before he had been the man’s client, now they were enemies.

Among those who took part in the Christmas Truce was wartime cartoonist Bruce Bairnsfather, who drew the famous ‘Old Bill’ cartoons of the period. He was photographed by one of his men in No Man’s Land that day, and wrote about it in his best-selling book ‘Bullets and Billets’ published in 1916. Nature writer Henry Williamson, most famous for his 1928 classic ‘Tarka The Otter’ was in the Truce at Ploegsteert. Having German ancestors, he felt some kinship to the enemy he met that day, and it was a life changing moment for him: one German soldier told Williamson that he was fighting for King, Country and Freedom, something he could not square that with the fact that supposedly he was fighting with the British Army for the same thing. Later in life Williamson used to get very morose on Christmas Day, thinking back to the Truce and the terrible loss of life in the war.

10. It was a remarkable day

While aspects of the Christmas Truce have been exaggerated, and there may have been no football, it was a truly remarkable day. Soldiers who were enemies stopped fighting and met each other on the battlefield. They obeyed a basic human instinct, rather than just follow orders. As the majority involved were professional soldiers they may have seen it as a rare opportunity to have a day off. Others would have been curious to actually meet a German, as it was likely few ever had. Whatever the reason, it was an event unique to 1914. While the odd battlefield truce, and a small scale one at Cambrai in the winter of 1917/18 took place, there was nothing on this scale ever again: whatever innocence remained in 1914 was lost in the great battles of the war on the Somme and at Passchendaele.

One Reply to “Ten Facts About The Christmas Truce”