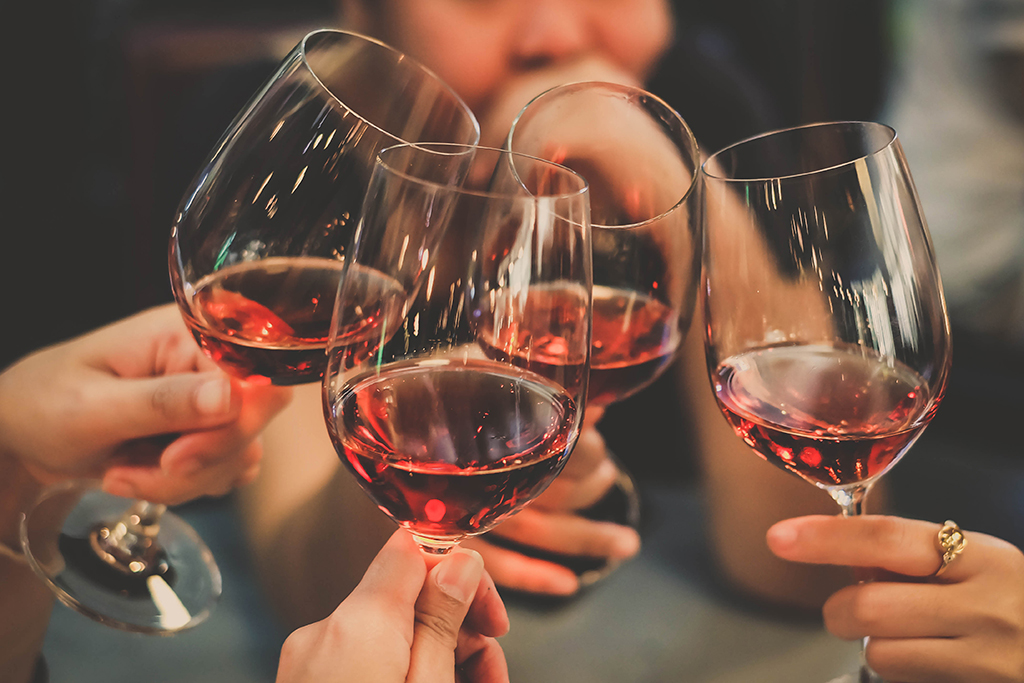 Have you been true to your word and not touched a drop of wine, beer or your favourite spirit throughout the whole month of January? Well, there’s some good news in store… the end of dry January is nigh!

And, to all those who’ve soldiered on through the month, abstaining from alcohol, this one is dedicated to you.
We all know that a holiday just isn’t a holiday without a little – or a lot – of overindulgence, and for all you wine connoisseurs out there, there’s no better place to sample the local delicacies than within the wine regions of Europe!
So, if you’re more than ready for that first tipple of your favourite beverage, but you’re still trying to power through those last remaining days, turn those cravings into wanderlust and find out about the fascinating places behind your favourite glass. 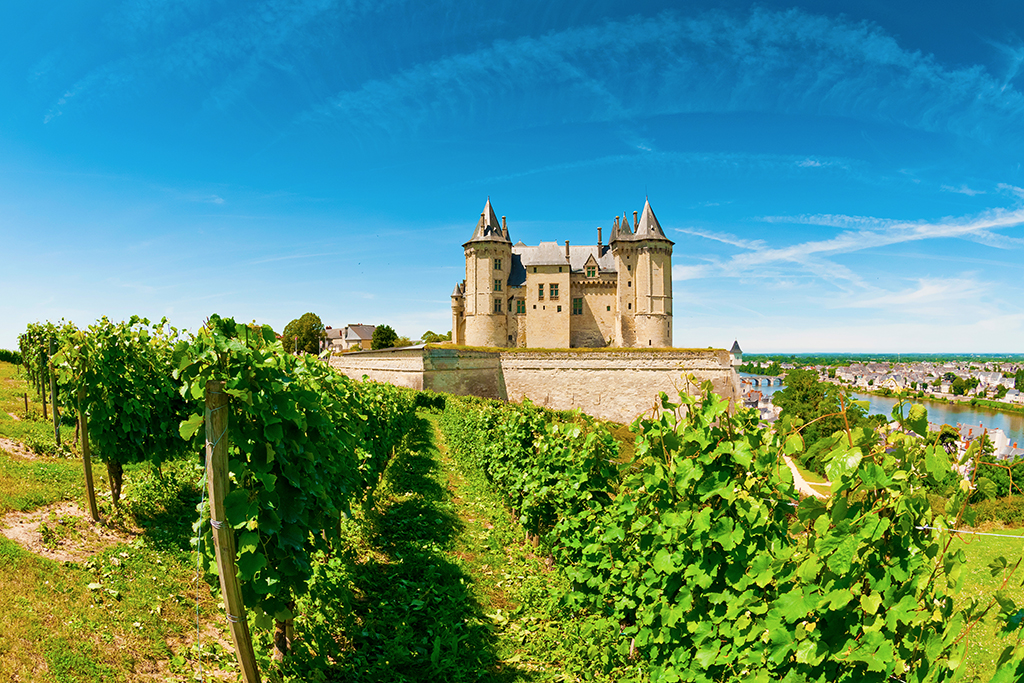 Deep within central France, marking the border between the north and south, and just a short distance away from the capital city of Paris, lies the lovely Loire Valley.
Or, should we say the ‘Garden of France’? A name awarded to the region due to the abundance of vineyards lining the banks of the river. And, that’s a great start, right?
The Loire Valley produces grapes such as the popular white Chenin Blanc and the red Grolleau and amongst the stunning natural scenery, you’ll find châteaux, castles and palaces dotted along the river… but it’s the 4000 wineries that we’re most interested in.
Producing an array of world-renowned quality wines, from light rosés to deep reds and sparkling whites, there’s something for everyone to enjoy, whatever your tipple of choice. 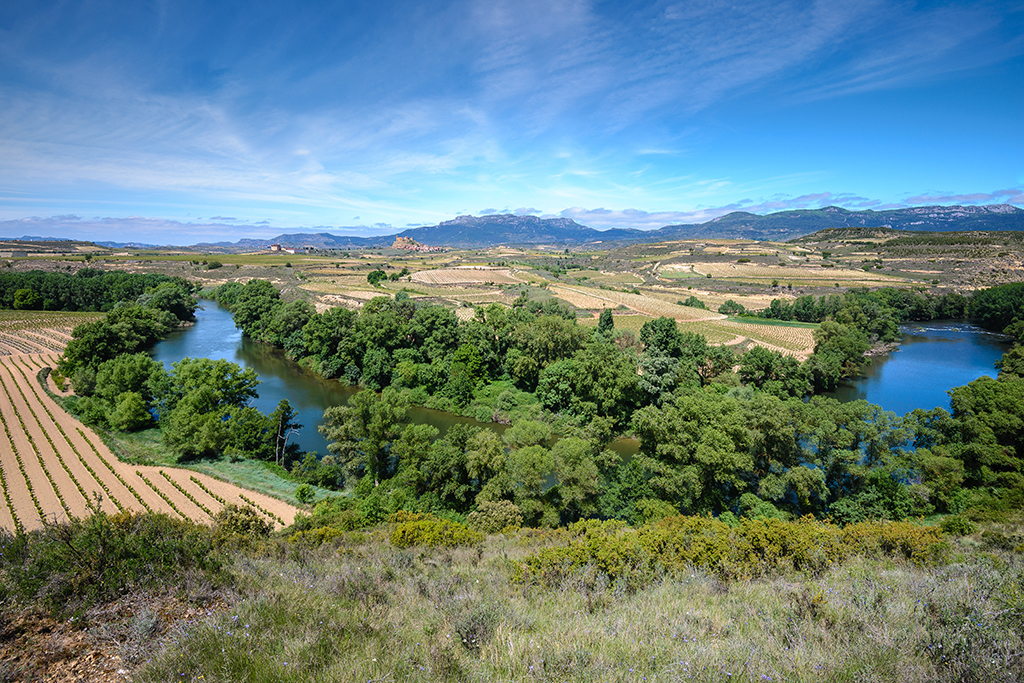 If you’re a glass of red sort-of-person, then Spain could be the one for you… Situated at the foothills of the Pyrenees Mountains, La Rioja is close to the ‘Way of St. James’ pilgrimage route and is centred on the Ebro River Valley.
With beautiful views of medieval villages, endless vineyards and olive groves – not to mention the unbroken blue skies – the La Rioja region produces an abundance of full-bodied red wines.
And, the wines from Rioja are as age-worthy as those from the Chianti and Bordeaux regions – they’ve even been produced since Roman times!
Rioja’s main grape is the Tempranillo, however, most wines are blended with smaller amounts of others, such as the Garnacha and the Mazuelo grapes, but, one thing is certain, they always taste divine!

Often overlooked as a wine region within Europe, we say the Douro Valley in Portugal is amongst one of the best!
It’s home of the world-famous Port and, as a matter of fact, was the first wine region in the world to have a formal demarcation. Yes, just like Champagne, the Douro Valley is the world’s only producer of Port.
History played a huge part in the production of the sweet tipple. When England was at war with France in 1756, it was decided that they would import wine from Portugal instead.
However, due to the long journey, the wines would often become spoiled by the time it reached England. So, in order to preserve them, they were fortified… and in the city of Porto, Port was born!
And, due to its deliciousness, the sweet, red dessert wine is still extremely popular to this day. 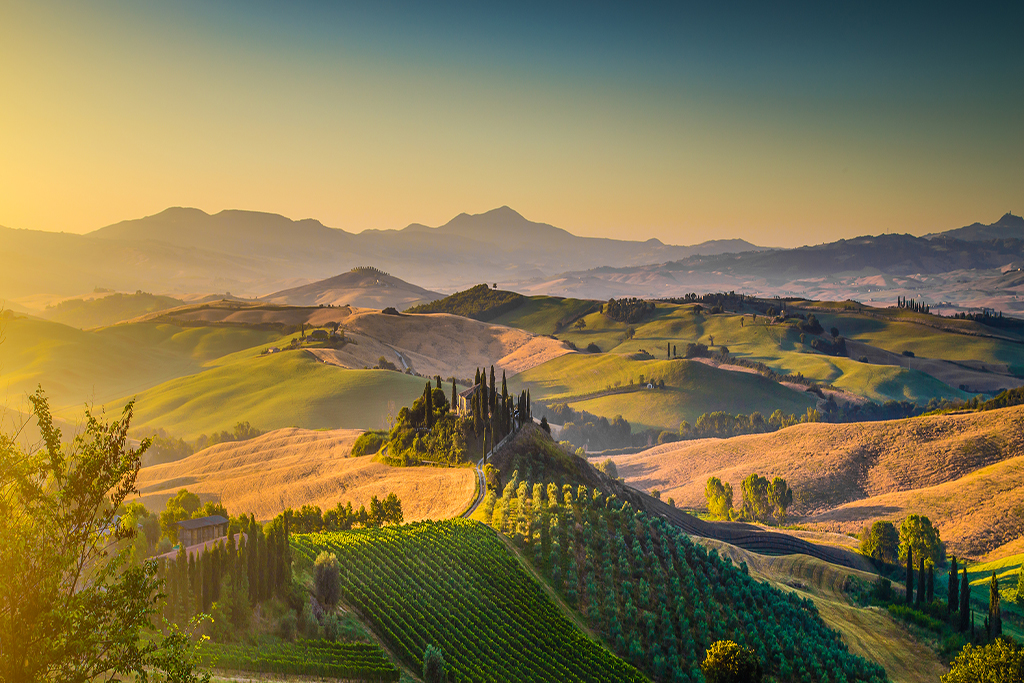 It’s true what they say, it really is hard to find a bad glass of wine in Tuscany! And, not only does Tuscany produce one of the most beautiful wines in the world, the Chianti, it is also one of the most beautiful places on earth!
Unique landscapes of lush green, sloping hills full of olive groves and vineyards, are scatted with tiny traditional villages, seen for miles and miles.
Chianti, typically and traditionally presented in a bottle known as a ‘fiasco’, wrapped in a straw basket, is a dry red wine, which goes very well with the delicious cuisine that you can enjoy in Italy! 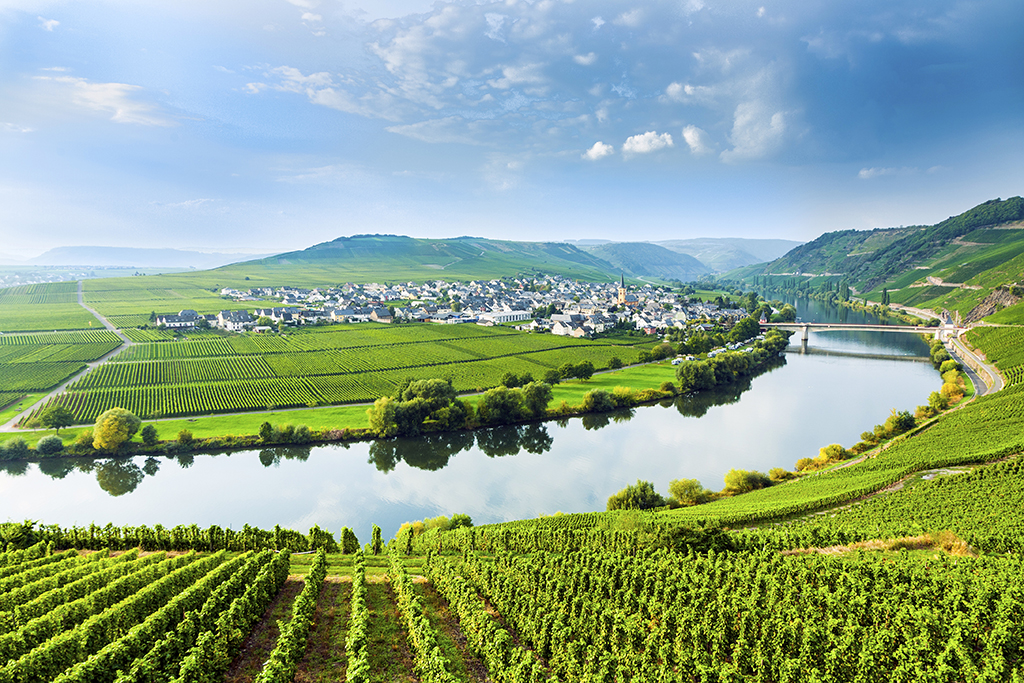 Germany is home to thirteen different wine regions which make the country one of the top producers in Europe. But, out of all thirteen, the Moselle is arguably the most famous… and for good reason.
Vineyards cover the steep hillsides that border the Moselle River, and it’s here where the celebrated Riesling grapes are produced, along with the Elbling, Pinot Blanc and Kerner, to name a few.
These grapes create some of the most delightful light and crisp wines you’ll ever taste. And, they’ve been made here since the 15th century, when the Romans planted their crops along the Rhine and Moselle rivers in order to supply their garrisons with wine.
Add to that the fact that the Moselle Valley looks like something straight out of a fairy tale, you’ve got the perfect destination for wine lovers and old romantics alike.
Visit these impressive wine regions and much more on a Leger Holidays escorted tour – we even offer wine tasting excursions, if this blog has whet your appetite.

New Year, new you, you’ve probably heard that a lot. Yes, It’s that time of year again where everyone seems to be kick-starting those New Years’ resolutions for 2018…

Joining the gym, eating healthily, maybe even giving up your usual tipple for a dry January… but is there a truer tonic for pressing that reset button, introducing yourself to new experiences and enlightening yourself, than heading off on a new adventure?
Travel is said to be the only thing you can buy that makes your richer, but with so many places to visit and so much to see and do, choosing where to book for your next holiday is quite the decision.
But, in the spirit of trying new things, and enjoying new experiences, we’ve put together our top destinations to travel to in 2018. Perfect if you’re looking for a little travel inspiration. 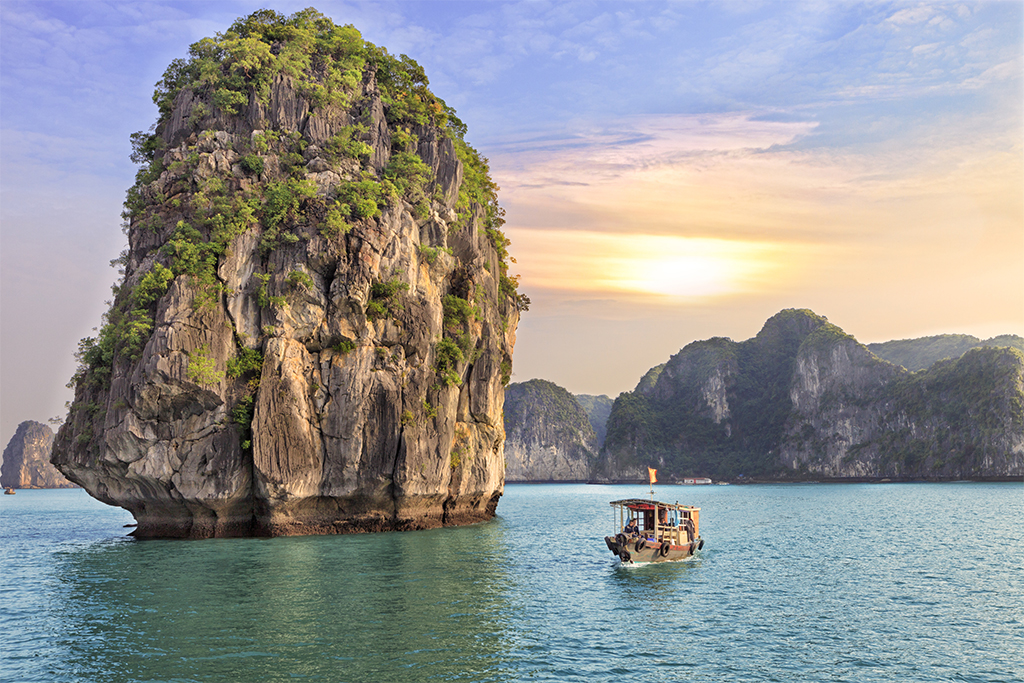 If you’re looking for somewhere exotic, packed with plenty of memorable experiences and that once-in-a-lifetime feel, Vietnam has it all. From the serene views over Ha Long Bay, dotted with junk boats to the buzz of the capital city Hanoi.
With waves of moped cyclists weaving through the traffic, some with pigs strapped to the back (yes, really), pyjama fashion and cà phê Chồn, a rather curious coffee, partly digested by the weasel-like civet. You will feel a world away from normality in this fascinating country.
But, beyond the outstanding natural beauty and unique cultural experiences, Vietnam also has a complex and diverse history. The impact of the infamous 19-year-long Vietnam War can still be felt this day, from the War Remnants Museum to the Dien Bien Phu War Cemetery.
A fascinating destination and one that will leave you awe-struck, gratified and completely enchanted by what it has to offer. 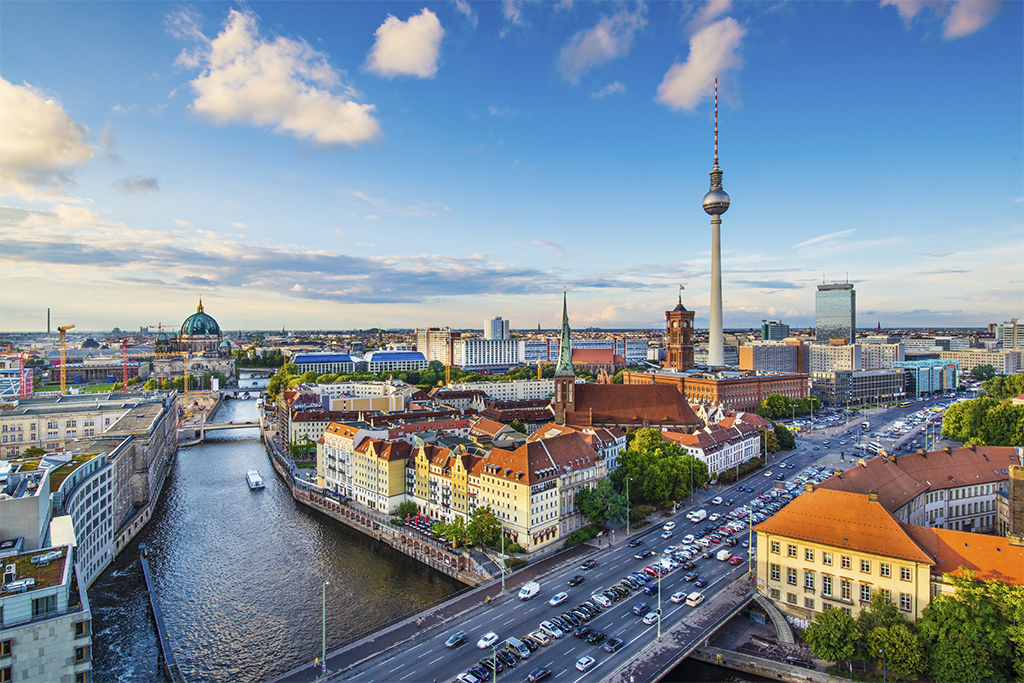 Another hub of culture and history, the German capital is a must when it comes to places to visit in 2018. Whether it is part of a longer holiday or even a short break (especially for the Christmas Markets), Berlin’s combination of charisma and character is certain to appeal to almost anyone.
The iconic buildings, such as the Reichstag and the Fernsehturm TV tower are high on many visitors to-do list whilst in the city. But, digging a little deeper, there’s much more on offer than the popular postcard places.
The Treptower Park is host to an impressive Soviet War Memorial, set amongst a huge cemetery for 5000 Soviet soldiers. You can visit Checkpoint Charlie, the former crossing point between East Berlin and West Berlin and the nearby Mauerpark, a former part of the Berlin Wall and its death strip.
And, of course, you can visit the East Side Gallery, a 1316m long section Berlin Wall itself, or see the impressive Brandenburg Gate. There’s so much to fit into your time in Berlin, it will more than likely leave you wanting to visit again. 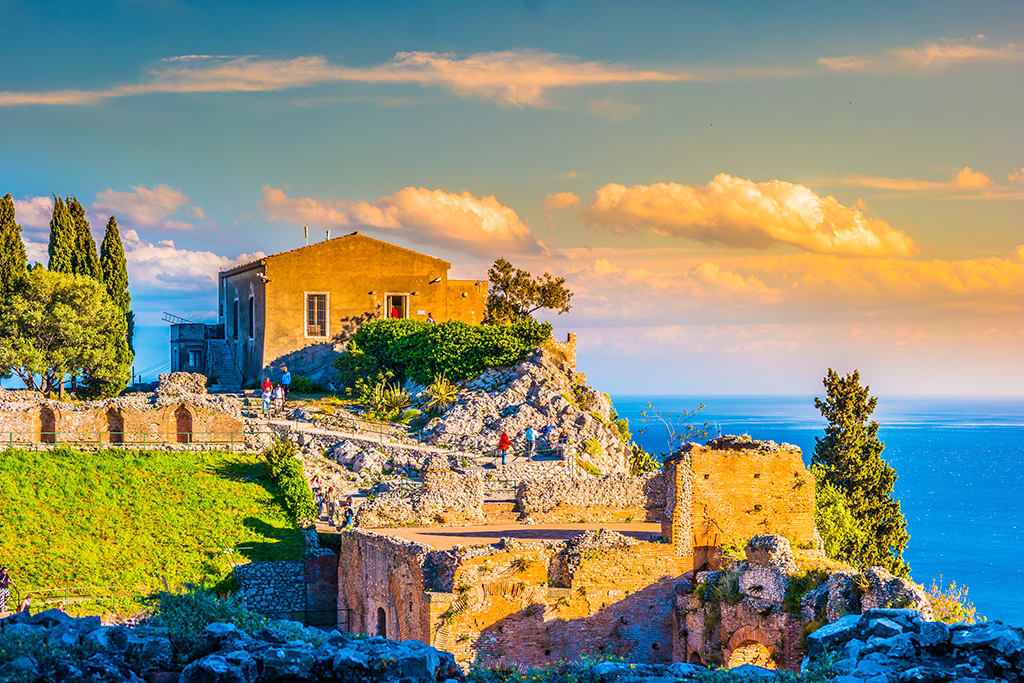 Are you talkin’ to me? Yes, we are! If you’re a fan of The Godfather, that is. Or, just anyone who is looking for a taste of the less trodden parts of Italy, really, Sicily could just be your cup of tea in 2018.
Yes, the small Italian island is the famous ancestral home of the notorious Corleone family, who you’ll know from being at the centre of the classic cinematic saga.
Perfect for any film buff, you can head to the foothills of the Peloritani Mountains where you’ll find some rather recognisable surroundings in the town of Savoca. You can even watch the world go by on the shady terrace of Bar Vitelli itself. And, best of all? The bar hasn’t changed since the film’s release in 1972!
But, it’s not all movies and the Mafia in Sicily, in fact, it’s one of Italy’s most beautiful islands.  Taormina offers beautiful views of the east coast and a perfect perspective of Mount Etna. It’s easy to see why this has become the summer playground of the rich and famous
Many big names have been spotted seeking the dolce vita in the Taormina, from Oscar Wilde to Elisabeth Taylor, and a whole host of big-screen stars jetting in for the Taormina Film Festival, you’ll certainly be in great company wandering the streets of this glitzy hill-top retreat. 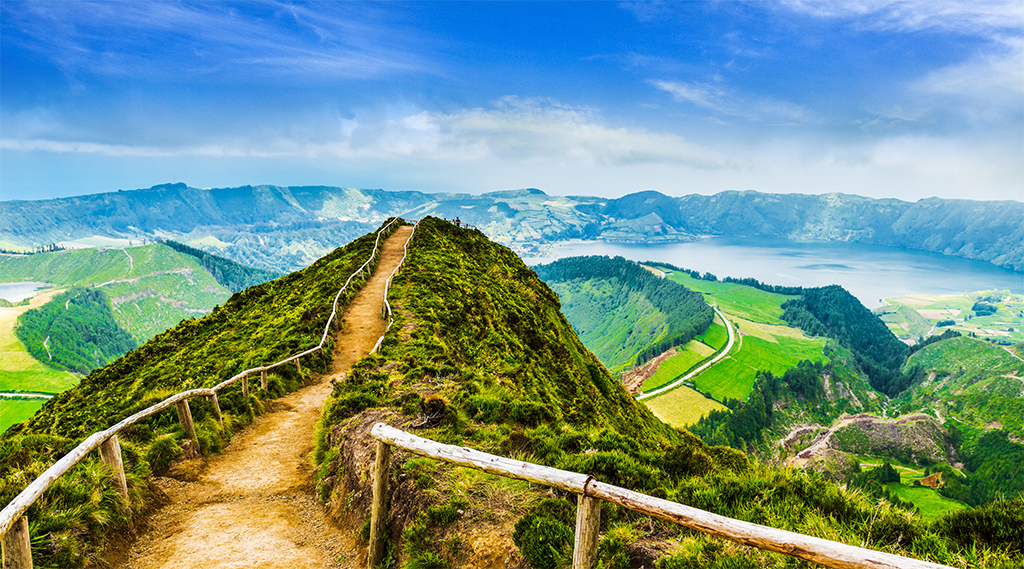 When you think of Portugal, you’ll be forgiven for thinking the sun, sand and the Algarve. But we’re thinking somewhere a little more exotic. The Azores islands are an autonomous region of Portugal, sitting deep within the North Atlantic, and offer a truly unique and really quite breath-taking experience.
It’s been called Europe’s answer to Hawaii and one of Europe’s best-kept secrets, a cavern of volcanic enchantment, you will bear witness to some pretty spectacular scenery, and who could say no to that?
Furnas City is host to botanical gardens, hot and cold springs and a lush, green, mountainous setting. The mystical lake, Santiago, is almost other-worldly, with its green waters sitting 334 metres above sea level, surrounded by the borders of a small crater, it’s a must-see whilst in the area.
You can even head over to Pico Island, the largest of the Azores. Dominated by Pico Mountain, it became a nature reserve in 1982 and has been producing delicious wine since the 15th century.
You won’t be disappointed by these beautiful islands, in fact, they could just prove to be the exotic adventure you’re looking for, all without leaving Europe in 2018. 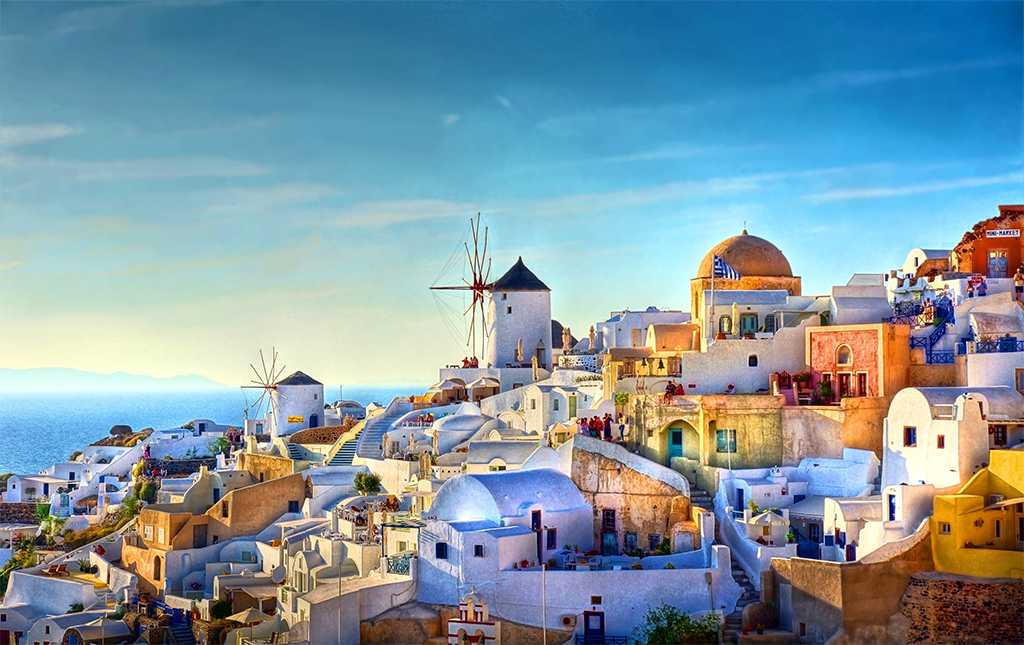 A bucket list destination by the very definition, the remarkable island of Santorini is stealing hearts and keeping travellers flocking in for the 2018 season.
The world-famous view over the iconic caldera, whilst perched in the popular cliff-side towns of Fira and Oia, is one that you won’t get over for a while, especially at sunset. It’s a scene you’d see on postcards picked up throughout Greece, and that’s how you know you’re in an incredible location.
With the beautiful blue church domes scattered around the whitewash towns, seemingly clinging to the cliff edge, met by black, volcanic beaches at the foot, you’ll certainly get the best of Greece in Santorini.
Not to mention the old saying that there is more wine than rain on the island, and you have the delicious Greek cuisine to pair it with, from mezze to a moussaka, it’s a holiday for your taste buds as well as your sense of adventure.
If these incredible destinations have whet your appetite for a holiday to remember in 2018, why not see more on an escorted tour? At Leger Holidays, we have tours that encompass all of the above and lots, lots more. So what are you waiting for? Head over to www.leger.co.uk, today.