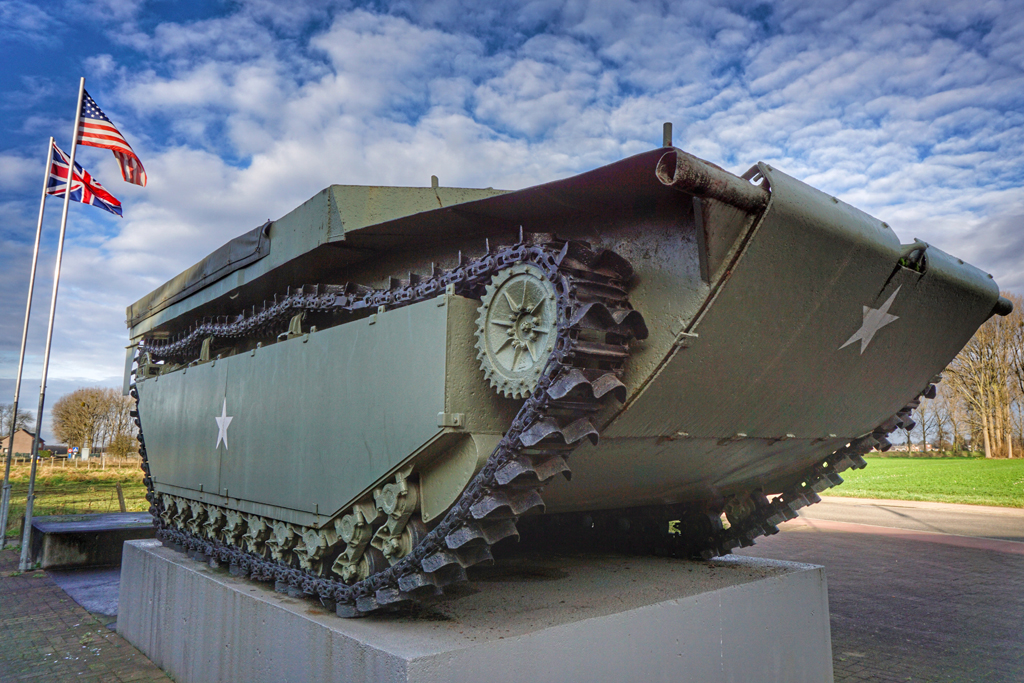 In the autumn of 1944, the Allied forces found themselves advancing on a wide front across the Netherlands. The famous Operation Market Garden, leading to Arnhem, took place but there were many forgotten battles along the eastern corridor of Holland. Find out first hand about our brand new tour, Battlefield Netherlands, from our specialist guide Jonathan Ball.

Operation Blackcock was a large scale methodical mopping up operation. It was not planned to make any deep thrust into the enemy defences or capture large numbers of Prisoners of War. It proceeded from stage to stage almost entirely as planned and was successfully completed with minimum casualties.

That was the official 21st Army Group take on the events of February 1945. Lt-Col Frank Coutts of the Kings Own Scottish Borderers held a slightly different point of view…

I would very much like to meet that staff officer from 21st Army Group sitting in his caravan or chateau outside Brussels with a large whisky and soda on his table. He had the cheek to add ‘with minimal casualties’. What in Heaven’s name is minimal? One mans life is precious and XII Corps suffered over a thousand killed and wounded.

For our BRAND NEW four-day tour, Battlefield Netherlands, we aim to take our guests very much off the beaten track in the Netherlands which to most British minds ends on the banks of the Neder Rijn at Arnhem. On the recent recce, we looked at the Battle for the towns of Overloon and Venray as the Allies pushed eastwards from Nijmegen towards the River Maas and beyond to the borders of the German Reich. First attacked by the US 7th Armored Division, the Americans found Overloon too tough a nut to crack. In 7 days they advanced little more than 2 kilometres suffering 452 casualties and having 35 Tanks destroyed, 13 of them in quick succession in just one day by a solitary German 88mm Anti Tank Gun. Following the withdrawal of the ‘Lucky 7th’ the task of taking Overloon was given to the British in the shape of the veteran 3rd Divisions’ 8th Infantry Brigade. The Battalions involved lead the British assault on D-Day in Normandy landing at 0730 hours on Sword beach and it’s their fortunes we followed. Firstly with the Suffolks on their start line north of Overloon. We looked at the story of Nelson Brown, a Dunkirk veteran and a bit of a character. The night before the attack on Overloon he shaved a swastika in his hair. By the next morning, he was dead. Scythed down by German machine gun fire literally yards from where he emerged from the trees at the beginning of the attack.

We followed the Suffolks to the site of a windmill, destroyed during the fighting on the Oploo road. All around the fire-swept, flat terrain gives the visitor a first-hand impression of what it must have been like on that October day to advance under heavy fire with so little cover. George Rayson, a Suffolks veteran was later to remark of the fighting around the Windmill “It was bad enough on D-Day but this was one of the worst days of my life, why I’m still here today I don’t know”

After the Suffolks, we followed the story of the East Yorkshire Regiment from the perspective of the defending German Paratroopers. In a wood, there is what a colleague of mine described as some of the best-preserved trenches of the Second World War he’d ever seen. Amongst these trees took place bloody, hand to hand combat as the East Yorks battled through to their objective.

Then it was on to the beautifully maintained CWGC Cemetery in Overloon before lunch and a visit to the superb museum in the town. There’s lots of original battle damaged kit recovered from the Battlefield in there that again illustrates the ferocity of the fighting.

After lunch, we walked in the footsteps of George Eardley. A Sergeant whose actions in destroying 3 German Machine Gun Posts was to culminate in the awarding of the Victoria Cross. After that, we travelled to the crossing of what is today the peaceful Loobeek River. It was no easy objective in 1944 and for good reason did the locals later know the river as the ‘Bloodbeek’. 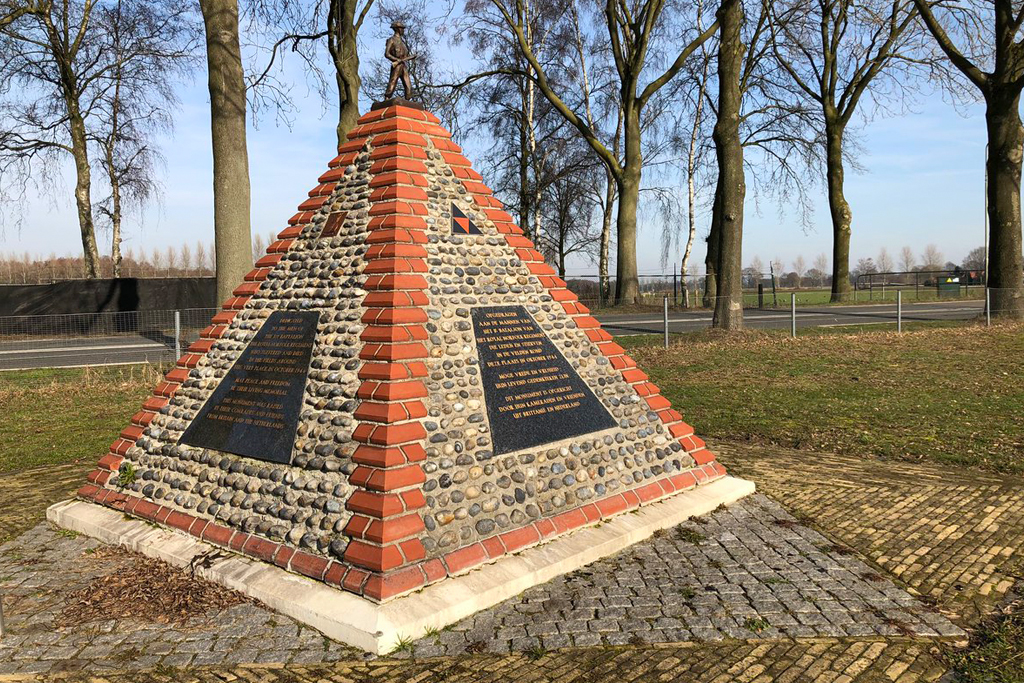 Later, after paying our respects to the boys in Venray CWGC cemetery who fell liberating the town we moved on to end the day at Ysselsteyn German Cemetery. The only statistic you really need to know here is the number of men buried, 31,598. Everything else pales into insignificance after that.

The following day took us around what was known as the Roer Triangle with Operation Blackcock, arguably one of the most interesting series of battles you’ve probably never heard of?

We started at Brunssum CWGC cemetery with Brigadier Gerald Mole, killed when 700 mines that had been lifted detonated next to his Headquarters. When Mole was buried the British guns fired in salute using live ammunition on carefully selected targets across the border in Germany, an act that Gerald Mole would no doubt of approved of and incidentally our next destination on the tour.

We crossed the border to look at the Battle for Geilenkirchen and in particular the fight for the woods west of the village of Tripsrath. What took place in these woods was described by one senior officer as being akin to scenes from the First World War. The assault was made by 5/Dorsets and the wood with the trenches and dugouts which remain to this day was named in their honour as Dorset Wood.

Following our brief foray into Germany it was back across the border and to the Dutch town of Sittard for lunch. We took time at the towns CWGC cemetery to look at the posthumous award of the Victoria Cross to its youngest recipient of WW2, Fusilier Dennis Donnini, just 19 years old. Think about what you were doing at 19?

After lunch, we moved along the eastern bank of the River Maas to the town of Susteren. A superb and very original German 88mm Anti Tank gun awaited us there plus the scene of the bitter street fight for control of the town.

Leaving Susteren, we headed on to take in the site of another VC action, the only VC of WW2 awarded to a man of the Royal Army Medical Corps, Eric Harden, the Commando Medic. When men from 45 RM Commando were pinned down Eric Harden went out unarmed on at least three separate occasions to bring in the wounded. On that fateful third trip out he was shot and killed. As Derek-Mills Roberts was to write to his widow later, “it’s easier to be brave with a rifle in your hand than a stretcher”. 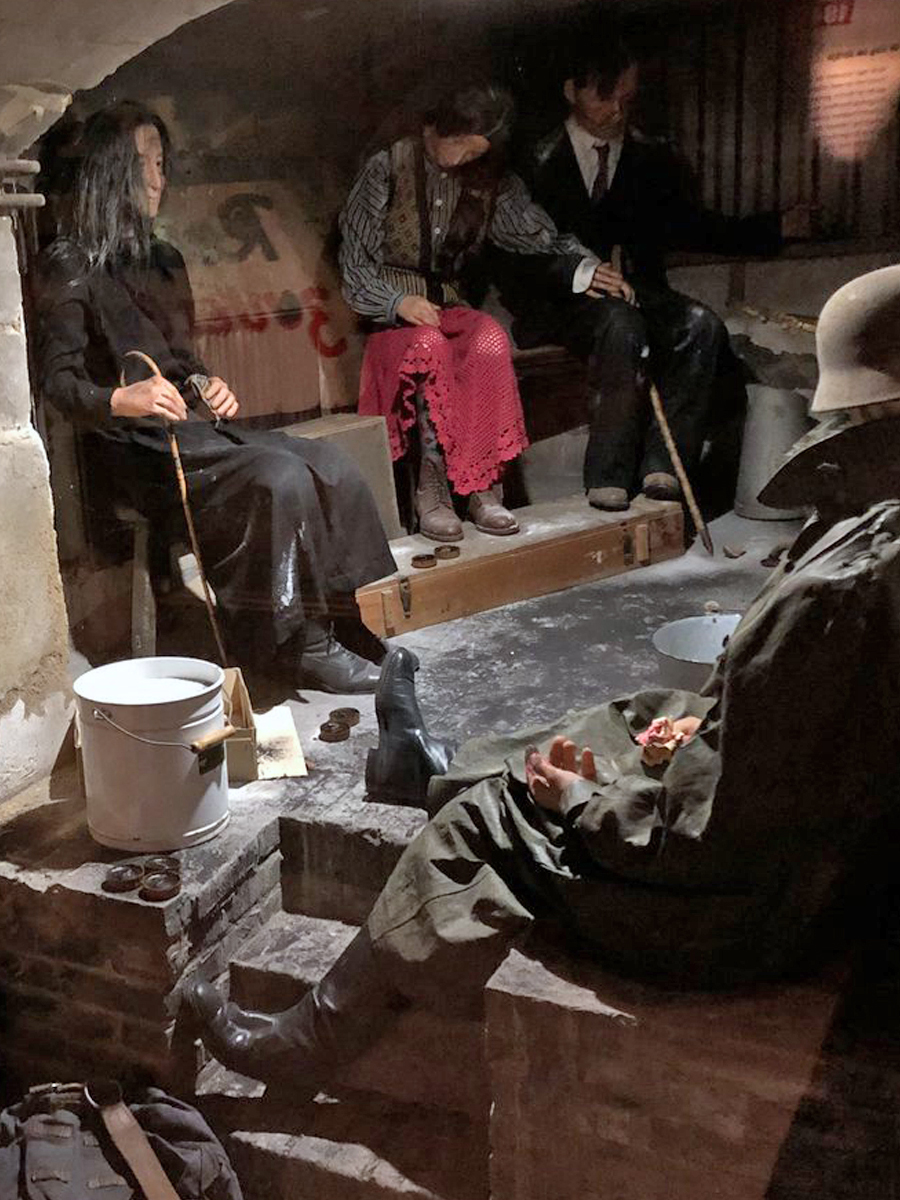 So those are some of the less explored Battlefields of the Netherlands. We finished with a flourish though at the simply staggering Eyewitness WW2 Museum in Beek. It’s a private collection, beautifully presented which tells the story of the war in the Netherlands and doesn’t shy away from some uncomfortable truths from those years of the German occupation.