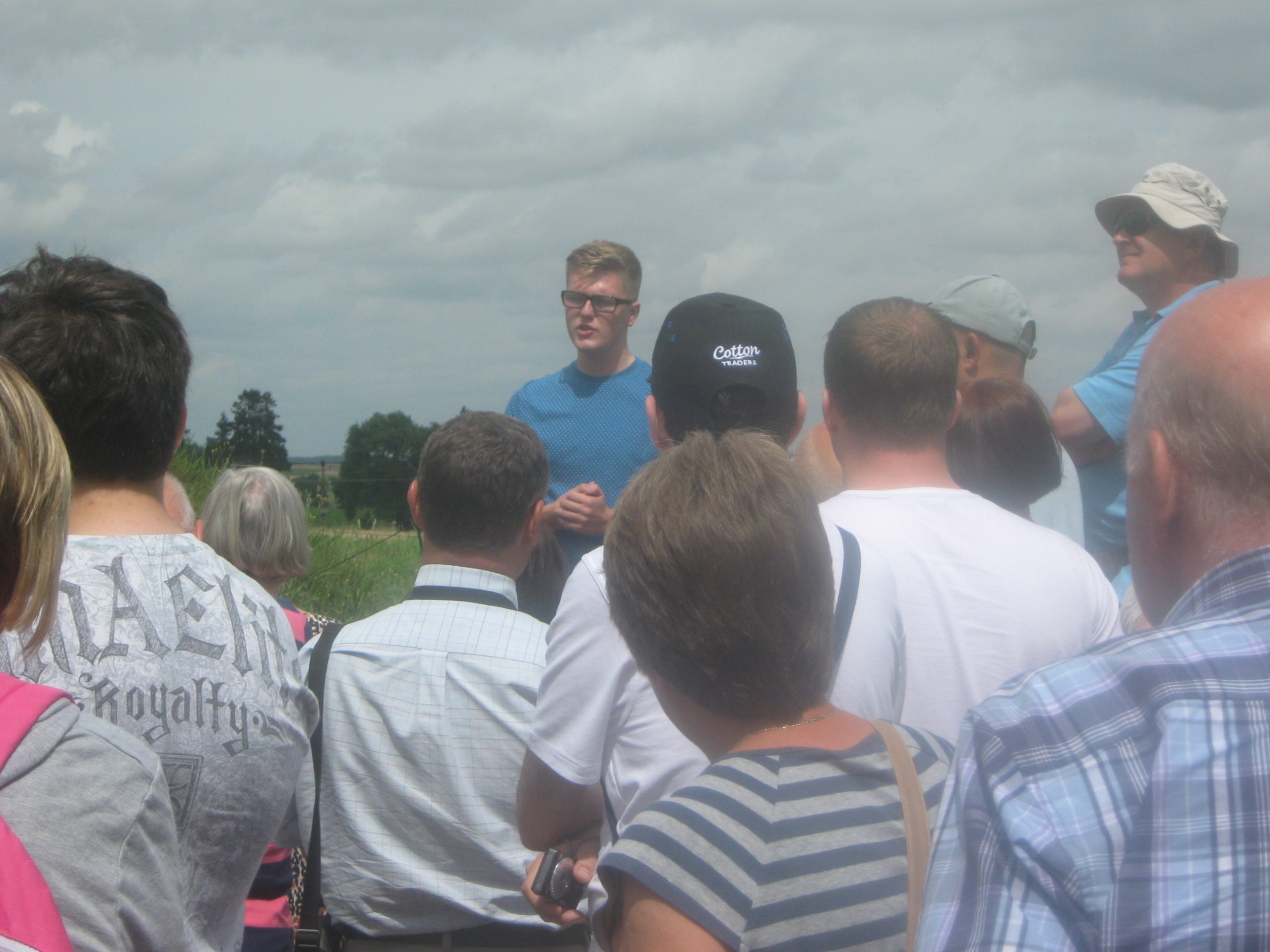 A battlefield guide in the making

When 15-year old budding World War historian Conor Reeves, from Cheshire, first came on a Leger battlefield tour, little did he know where it would lead.

After taking the Old Front Lines tour, he contacted his battlefield guide to thank them for the experience and to ask if there was any possibility he could do some work experience on a future tour. Fully expecting a polite â€˜noâ€™, he was amazed when Legerâ€™s head battlefield guide, Paul Reed, got in touch to make it happen. So in July 2013, Conor took the â€˜All Quiet on the Western Frontâ€™ tour â€“ but this time as a trainee guide, presenting some of his extraordinary knowledge about the topic to other guests on the tour. Here he explains the experience in his own words:

On the 26th of July, I embarked upon my journey to the First World War battlefields of Northern France and Flanders. I had travelled with Leger on three previous occasions and, consequently, knew what to expect. This time, however, my experience would differ because I would be aiding the Battlefield Guide.
After weeks of planning and preparation, I arrived at the hotel to be greeted by the specialist guide. We discussed how the weekend would work and which â€˜presentationsâ€™ I would perform.
The 27th of July saw our group head out onto the Ypres Salient, in Belgium. After visiting the recreated trenches and museum at Sanctuary Wood in the middle of an electric storm, we were bound for Tyne Cot British Cemetery. The largest British and Commonwealth war cemetery in the world, with around 12,000 burials, Tyne Cot always captures hearts and minds of visitors; whether they are first timers or regulars. This would be the setting, and what a spectacular setting it was, for my first presentation. I decided to set the scene and put the cemeteries into context with a brief overview of common traits and a brief history of Common Wealth War Grave cemeteries as, for many, it was their first time visiting the battlefields. This was a leap of faith on my part as I had to judge to what depth of detail I should go into and how much people already knew.Â  Although, at first, my presentation started a little quietly, I started to pick up techniques from our guide. I tried to amalgamate a selection of different techniques like facts, opinions and anecdotes.


People were soon asking questions and it was a pleasure to able to answer them; it was a thoroughly enriching experience to help people understand and enjoy the trip. Although the battlefields have a certain pull factor, insisting that many visitors return time after time, for many it would be the first and only time on the old frontlines. The thought that I was helping to forge the only memories of visiting the battlefields on which their relatives probably fought and died, really is priceless. I choose the word â€œisâ€ with some conviction because it still makes me feel proud and very grateful, even to this day.
Later that day, I presented some information at the Ploegsteert Memorial, with subjects including the story of a posthumous Victoria Cross winner and a former England Rugby captain. With my confidence improving, I was receiving lots of positive feedback which would stand me in good stead and give me great amount of encouragement for our time on the Somme, the following day.
The Somme holds a very special place within the consciousness of the British nation because of its apparent embodiment of the horrorsÂ associated withÂ the First World War.
Feeling more at home, where I one day wish to reside, I was much more confident on the battlefields of the Somme, doing presentations at La Boisselle and Beaumont-Hamel. Presenting the events of 1916 to some of the descendants of the victims of this most gargantuan of battles was an absolute dream come true. A dream which I sometimes doubted would ever come to fruition, but which has done so before my 16th year. My dream, however, would not have been achievable if the opportunity had not been provided by Leger and its guides. To talk about the disastrous first day of the battle of the Somme was an honour and a privilege; something I will forever look fondly upon, to be able to share the stories of heroism and blunder and bear witness to the sacrifices made in the name of the British Empire.
On the Somme, it was a great surprise to be met by Paul Reed; the head Leger battlefield guide. I have previously met Paul a couple of times and he arranged my work experience, so I thought it was very nice of him to take time out of his holiday to see how I was getting on. Paul has continued to support me throughout my development and education into The Great War and is always willing to give me support and advice. He inquired as to how I was finding the experience and I gleefully explained what I had done and how brilliant I was finding it all. I even got him to sign my copy of his book “Walking the Somme”. Although I could have chatted to Paul all day, the tour beckoned and I had toÂ adhere to battlefield guide rule number one; the customer is your number one priority – another moral I learnt as a result of my time spent with the great staff at Leger holidays!

We finished the day at the Thiepval memorial to the missing of the Somme. An appropriate ending to the day, putting the size of the battle into context with its 72,000 names, each one â€œdenied the known and honoured burialâ€ given to their comrades.
Earlier in the day, I had agreed to help a lady find her Grandfather on the memorial. One, amongst the endless names. To aid her in finding the relativeâ€™s name, which was the sole purpose of her pilgrimage, was an experience that I will never forget.
Aside from the historical and factual information gained from the trip, I gained a great amount of experience in public speaking and presentation which will help greatly in the future. Working with Leger has made me even more set on pursuing a career in military history which I will continue to work towards over the next few years. The ultimate goal at the end of my education is to be able to submerse myself in the history of the Great War and live on the battlefields, permanently, working for a company like Leger.
Until then!
Conor Reeves 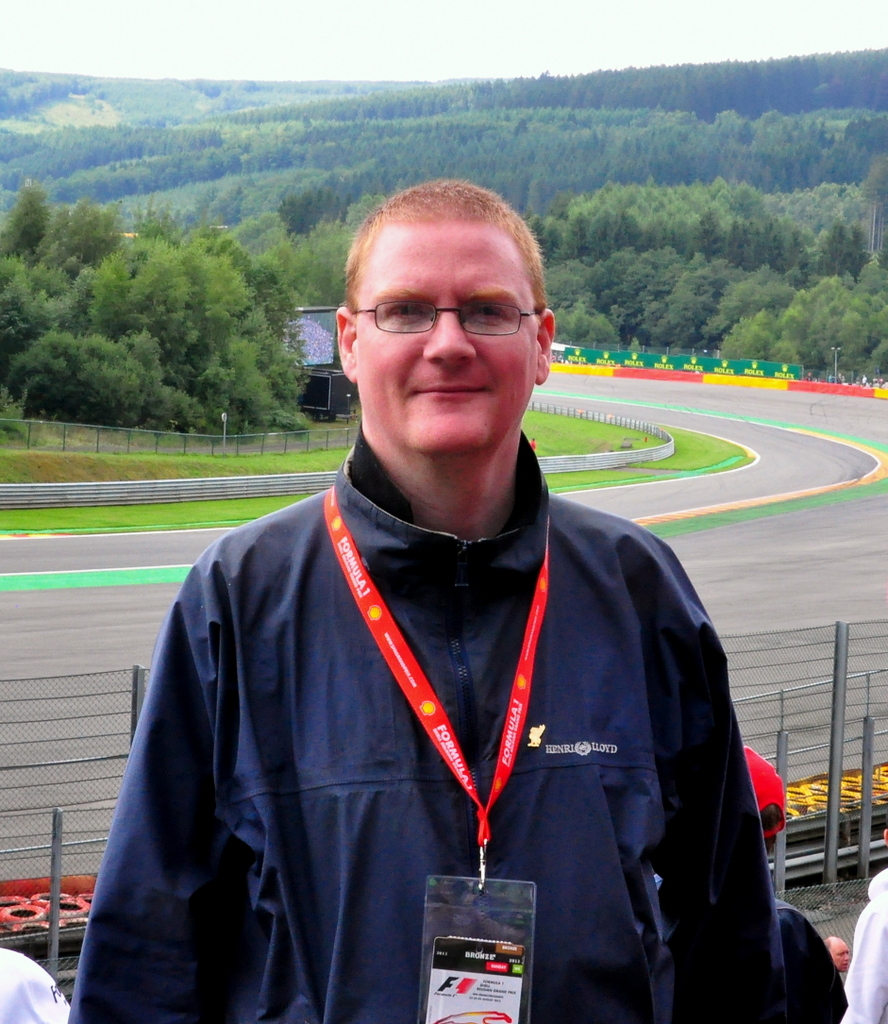 Many people who go to a Formula One event for the first time talk about the noise – but no-one ever seems to mention the deep rumble you actually feel in your chest.

It was certainly a shock to me at the Spa-Francorchamps circuit in Belgium as the cars came out onto the track for a practice session on Saturday.
Sitting just a few metres away on the bank beside the lightning-fast Kemmel Straight, the roar of the engines can make your whole body rattle.
So God only knows what it must feel like to strap yourself into the cockpit of one of those amazing machines, basically rockets with wheels, and blast down the track at more than 200mph.

I’m not an obsessed F1 fanatic, but will watch the Grands Prix on television on a Sunday afternoon and follow who is doing well.
I was always interested, though, in knowing what it might be like to get up close to the action – and Leger’s three-night trip from the UK gave me the opportunity.
Spa is certainly a great place to experience everything that top-level motor racing has to offer.
Make sure you bring your hiking boots, though, as the circuit is nearly 4.5 miles long and extremely hilly as it winds its way through the Ardennes forest.
You’ll discover that immediately as you walk alongside the famous Eau Rouge corner that climbs steeply to a height of nearly 120 feet, about the size of a 13-storey building.
From there, you can walk all along the Kemmel Straight – the fastest part of the track – where drivers are able to put their foot right to the floor for more than 22 seconds to build up mind-blowing speeds.
At the highest point of Spa, pass through a tunnel underneath the circuit itself and walk downhill to the sweeping Pouhon corner that provides a natural amphitheatre for spectators.

From there you can weave your way out through the trees to the remote Stavelot corner, or go back below the track and then uphill again on the elevated pathway that runs parallel to the long Blanchimont section.
That will take you to the Bus-Stop Chicane, where the cars make a dramatic right/left swerve before crossing the finishing line.
And all of that was accessible with the general admission ‘Bronze’ ticket, included for Saturday and Sunday as part of the trip.
Best to wander around and see it all on Saturday, though, when the crowds are not quite as dense as they are for Sunday’s big race-day.
That’s when the real hardcore F1 petrol-heads get up bright and early to bag the very best spots to watch the action, getting their places by 6am as soon as the gates open.
And they come from far and wide with French mixing with Finns, Germans chatting to Spaniards and English alongside Italians – all cheering on their favourites when the race begins.
From our hotel in Antwerp we were coached the 100-mile journey down to Spa each day, arriving at around 10am.
Having walked around most of the circuit on Saturday and identified our favourite corners, it was heads down and straight to the location (Pouhon) on Sunday before luckily finding a few spare square feet of space to squeeze into.
Those who prefer to be a bit more civilised can upgrade to Silver/Gold tickets which guarantee a specific seat in a grandstand – and also offers the additional benefit of shelter from any rain which famously develops out of nothing around Ardennes.
On this occasion the wet stuff, which can really spice up the race as drivers battle to keep their cars on the track, stayed away on Sunday and Sebastian Vettel enjoyed a processional victory.
But that’s the beauty of live sport – you just never know what is going to happen – and being there in person was certainly a much different experience to watching on TV from the comfort of the living room.
For more information on any of our Formula One tours please visit our dedicated Formula One tour page.