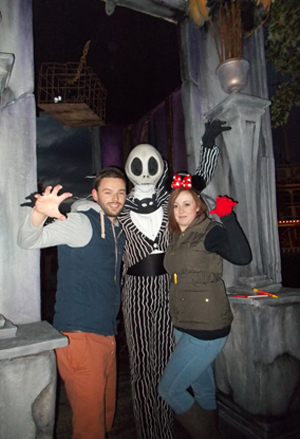 Ashley Rastrick, Leger’s Senior Web Designer has been designing Leger’s websites for the past 4 years and designed the recent Disneyland Paris website. In October this year, he felt like it was time to see what all the fuss was about at Disneyland Paris, taking his partner Fiona with him.

For a long time I have been wanting to go, especially with the amount of time I have spent staring at the pictures while designing the website. I felt like I knew it so well, but wanted to put it all into perspective and see it in person. The timing was never better really as it was Disney’s 20th anniversary celebrations so I decided to get out there and see what I was missing!

Which tour did you go on?

We went on the Disneyland Paris tour for 3 nights by coach, for the Halloween festival. View tour here

How did you get there and how long did it take?

To break up the journey, we travelled down to Ashford by car the day before and stayed at the Holiday Inn. The next morning, we got picked up by a feeder coach and taken to the Europort in Folkstone where we then met up with our tour coach for the rest of the journey. We then headed to the Euro tunnel to board our train, which was a quick 30 minute journey under the waters and out the other side at Frethun, France. We then continued our journey which was roughly 4 hours to the hotel, with numerous stop off points in between to stretch our legs. In total from being picked up from our coach in Ashford, it was about a 10 hour journey.

Where did you stay?

We stayed in the Explorer’s Hotel which is on the Disney site. The hotel featured a Disney Boutique (Gift Shop) and all day dining facilities which you’d expect. There was also a swimming pool with slides which is great for the kids and available till late. The hotel rooms were basic but had all the amenities needed for a good nights sleep. One bonus of staying at the Explorers is we noticed that the free shuttle bus is the first pick up and the first drop off point so you are guaranteed a seat on the way there! 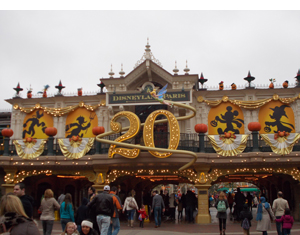 Is it better to stay on or off site?

We would say staying on site is much better as you get more of the magical feel that Disneyland gives you. There is also a shuttle bus every 10 minutes to take you to the Disney park and back again all day long which is very convenient.

If you were to go back again, which hotel would you stay in and why?

If we went back again, I think we’d pay that little bit more and stay in the Disneyland hotel. The hotel is situated right inside the park so you’d be first in the park, plus – you get early entry!

What was the weather like? Did it affect your visit?

Going to Disneyland in October, we didn’t expect the weather to be great, but it was a lot colder than we had anticipated. With waiting around in queues, we really noticed just how cold it was. On the first day we spent a day in just a jumper, the second day we decided to wear 3 layers and even bought some gloves! The day we left Disneyland it was just 2 degrees. Our advice would be to wrap up warm.

How long did you get in the parks?

Was it enough time to see everything?

We managed to see most of the parks. The Disney Studios closed a few hours before the Disneyland Park so we tried to plan our day so we could see everything.

Did you get on all the rides you wanted to?

Most of them! Having two full days in the park, we thought we would manage to see everything, but we were a little disappointed as we missed a few. The Saturday was twice as busy as the Friday and we had left a few of the bigger rides till the second day which was a mistake as the queue times we doubled. One of the most popular rides was space mountain, which we queued over an hour for, which in the cold, was not very fun! The one ride we didn’t get on due to a 65 minute wait, was crushes coaster. When going to Disney, we’d advise planning your days out between the two parks as there is also meet and greets to fit in, and shows which are only at certain times! Fast passes are also great too, but we were disappointed that you could only have one at a time! Which was your favourite and why?

I think most people would probably say The Tower of Terror, but from the screams we heard over the Studios park, we decided to give that one a miss! We have a few favourites, one being the Buzz Lightyear Laser blast which was really great fun in Discoveryland, and we also really enjoyed the Stunt Show Spectacular which was amazing and had such a great atmosphere.

Which was your favourite park?

We preferred the Walt Disney Studios! There wasn’t as much to do as the Disneyland Park, but there was some great shows like Cinemagique, Armageddon, Tram Studios and Stunt Show Spectacular as mentioned above.

Do you need kids to fully enjoy the park?

Absolutely not! Everyone turns into a big kid as soon as they walk into the park and see Sleeping Beauty’s huge castle in the distance. Plus, some of the rides have height restrictions so going without them means you get to go on every ride you want to.

What handy hints would you give anyone planning a trip to DLP?

Before you get to the park, make sure you are wearing comfy shoes as its going be a long day and get there as early as you can so you can enjoy both parks and all the rides without feeling rushed or disappointed that you didn’t get on all the rides. When you get into the park, you will be given a map and a parades/meet and greet schedule. We’d advise planning your day(s) around these so you can get to see everything!
If you want to join the 20th anniversary celebrations at Disneyland Paris, you can let Leger Holidays take you there! View packages here