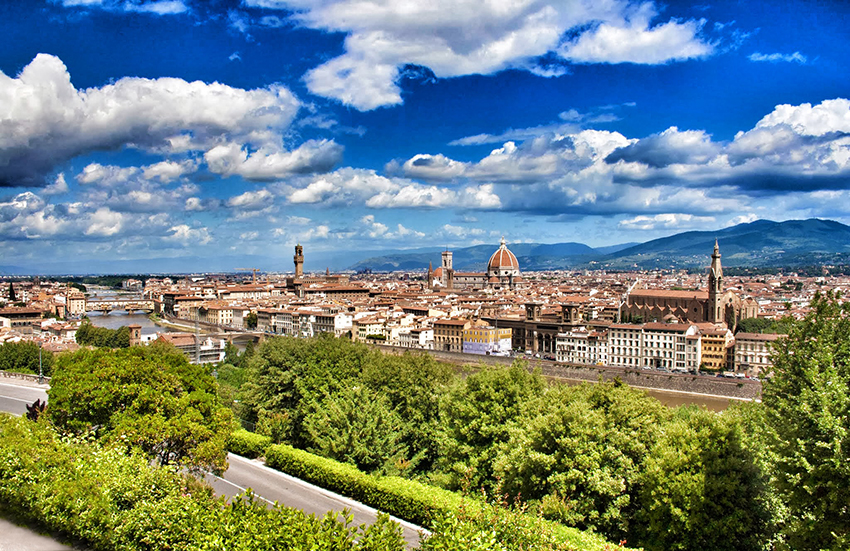 The final city visit on our tour of the Italian Riviera, Tuscany and Rome was the Renaissance city of Florence, a city that was mentioned quite a bit in my art history lessons.

It was a warm and sunny day as we travelled into Florence, or Firenze as itâ€™s known locally, heading firstly to a viewpoint high above the city. Florence sits in the valley of the River Arno and is surrounded by hills and mountains, and it was from the hilltop location of Piazzale Michelangelo that we were given an excellent view over the whole city with the rich terracotta dome of the cathedralâ€™s mighty Duomo dominating the panorama. This is the shot that appears on many postcards so itâ€™s the one to take for your album! Below us the River Arno ran past the pastel-coloured buildings and under the famous Ponte Vecchio which we could see over to the left.


At Piazzale Michelangelo, along with many people taking photos and posing for pictures for their album, there was a replica of Michelangelo’s statue of David, one of the masterpieces of Renaissance sculpture. Apart from that, the square itself wasnâ€™t much to look at â€“ but we were there for the view and that was incredible! Once everyone had the photographs they wanted we headed down towards the centre to meet our guide who would introduce us to her city.
Florence was once surrounded by high defensive walls and towers, and the Tower of the Mint, (Torre della Zecca) which we walked past on our way into the city was part of those walls. This tower was once connected to a string of buildings which were powered by water, and one of these was the Florence Mint (Zecca fiorentina) where the cityâ€™s golden florins were made.

Our guide led us past the Mint Tower and along Via dei Malcontenti, a narrow street sandwiched between cream-coloured buildings. This was apparently the road that criminals were led along to the public gallows, and so it was given the name Malcontenti â€“ â€˜malcontentâ€™ meaning unhappy.
After a while, after passing the Franciscan church of Santa Croce with its grand marble faÃ§ade and weaving our way through the narrow streets of the city, we came out at the Piazza della Signoria, dominated by the huge bell tower; the belfry of the Palazzo Vecchio (Old Palace). This is the city hall of Florence and it was in front of the building that I spotted another reproduction of Michelangeloâ€™s David, the most famous statue on the square. The real one, created in 1504, used to stand here but it was removed and placed in the Accademia di Belle Arti Firenze.

The square was buzzing with a great atmosphere â€“ apparently itâ€™s one of the most popular meeting spots for locals and tourists alike. Across from the city hall was the contrasting sight of designer stores being browsed by well-dressed shoppers and people strolling around trying to eat their colourful â€˜gelatoâ€™ before it melted in the warm sunshine. Being a girl who doesnâ€™t like shopping (yes, weird, I know!) I opted instead to join the gelato speed-eaters.
Frantically trying to keep the ice cream in its cone, I walked over to the large equestrian statue of Cosimo I de’ Medici standing just beside the city hall. Cosimo was famous for, amongst other things, the creation of the Uffizi which adjoins the Palazzo Vecchio and is now one of the most famous museums in the world, housing one of the greatest collations of art â€“ most of it from the Renaissance period. Works by some of the greatest Italian artists are held here: names such as Michelangelo, Leonardo da Vinci, Botticelli and Giotto, again, names I remembered from the A-Level art classes of my school days. This was one place I wouldâ€™ve loved to visit to bring to life all those paintings I’d studied in my text booksâ€¦ to see early works by Giotto; Botticelliâ€™s Birth of Venus and Caravaggioâ€™s Bacchus; all images I still remember. But it was time to move on.

Our guide escorted us along the busy pedestrian street of Via die Calzaiuoli, home to many designer and high street names, a pizzeria here and there and quite a few places to buy those all important ice creams. The sweet smell of crepes and waffles led us along the alleyway until it opened up to reveal the breathtaking Piazza del Duomo. A couple of hours earlier weâ€™d seen the huge domed roof of the Cathedral of Santa Maria del Fiore from the hillside across the river. Now we were up close, and it was truly magnificent.

Right in front of us was the huge structure of Giottoâ€™s Bell Tower. The column stands at almost 300 feet high and amongst its green, pink and white marble and displays intricate scenes. At the top, our guide advised us, the tower has 7 bells. We decided not to join the queues waiting to climb the 400+ steps to the top for a closer look and instead took her word for it.

The Dome itself, designed and built by Filippo Brunelleschi, is equally impressive. More than 600 years after it was constructed the â€˜Duomoâ€™, as itâ€™s known, still remains the tallest building in Florence. The cathedral is also the 4th largest in the world â€“ the first is St. Peterâ€™s in Rome, the second, St. Paulâ€™s in London and the third, Milanâ€™s Duomo.

A short walk through the network of bustling passageways took us to the oldest bridge in Florence, the Ponte Vecchio. Iâ€™d seen photos of this bridge spanning the River Arno and always thought it looked rather plain, so I wanted to visit it for myself and find out why this well-known landmark is so popular.
The Ponte Vecchio was once the only bridge across the River Arno and the only bridge in Florence that wasnâ€™t destroyed by Germans during WWII. Since the 13th century there have been shops on the bridge. Originally they housed fishmongers, greengrocers, butchers and tanners â€“ the waste from which created a rather unpleasant smell in the river, so much so that in 1593 it was ordered that only jewellers and goldsmiths would be allowed to have shops on the Ponte Vecchio, making the bridge a much cleaner and attractive place to visit. Today, the bridge is still lined with jewellery stores attracting hundreds â€“ probably thousands â€“ of visitors each year.

Approaching the bridge I saw the familiar sight of the construction and, even â€˜in the fleshâ€™, it struck me how ordinary it looked â€“ a jumble of mustard and reddy-coloured buildings which looked as if theyâ€™d been stuck onto the main structure. As I got closer I could see just how ramshackle it appeared. Once on the bridge, however, it was a different story. The place had a great atmosphere and was brought to life by the crowds of people gathered around the stalls and the wares of the gold and silver smiths which twinkled in contrast to the dilapidated appearance of the bridgeâ€™s exterior.

So, I can now say that Iâ€™ve visited Florenceâ€™s oldest bridge. It hadnâ€™t contradicted my view of it as a rather plain and uninspiring landmark and I think there are much more impressive places to visit in the city, but Iâ€™d seen it for myself. The visit to Florence had given me a good overview of the capital of Tuscany, a brief history of the city and some of its landmarks, and of the sights Iâ€™d like to return to â€“ namely the Uffizi Gallery.
Leaving the Ponte Vecchio and walking back along the Arno river, our visit to the Renaissance city had come to an end; another place to tick off my â€˜must visitâ€™ list… and another place Iâ€™d have to return to, one day.


Have you been to Florence? Share your stories and comments with us here!