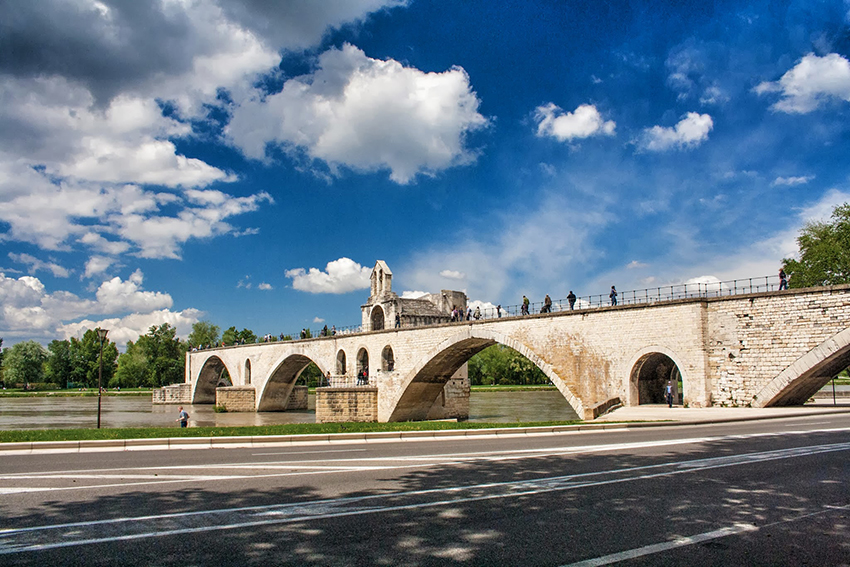 Passing through neat rows of grapevines and rolling green fields stretching as far as the eye could see, we continued with our tour of Provence and the Dordogne on our way to the charming walled city of Avignon.

It was a beautiful April morning and the sun was shining as we continued along twisting roads and past the terracotta rooftops of delightful little villages along the way.
Arriving in Avignon we soon had excellent views of the mighty Palais des Papes â€“ the Popesâ€™ Palace â€“ the largest Gothic palace in Europe, and the famous bridge: Pont dâ€™Avignon, Saint BÃ©nezet or â€˜the broken bridgeâ€™ as itâ€™s also known. Built in the 12th century, this bridge is the subject of a childrenâ€™s song Sur le Pont dâ€™Avignon, about handsome gentlemen, pretty dames, gardeners, dressmakers, grape growers and various other people all dancing on the bridge of Avignon. In reality, the bridge is only about 4 metres wide, so not a great deal of space for dancing!


We made our way through the charming streets to the Place du Palais â€“ the second of two main squares in Avignon, dominated by the huge palace which was home to Roman Catholic popes for almost 70 years during the 14th century. Climbing the stone steps we entered the palace for an audio tour around the enormous building with its grand halls, manicured lawn and spacious courtyards. The climb up to the roof terrace was well worth the effort â€“ the reward was an excellent view over the city, the river and the famous broken bridge.

For many years the Pont dâ€™Avignon was the only stone bridge along the 186 mile stretch of the river RhÃ´ne between Lyon and the Mediterranean sea. Over the years the structure was damaged and many of its original 22 arches were swept away by the choppy flood waters of the RhÃ´ne. The crumbling bridge had to be constantly repaired until the 17th century when the cost of rebuilding and continual maintenance became too much for the city of Avignon to bear and the bridge gradually weakened. In time, the surviving arches collapsed leaving the four that remain today.

After our palace tour we walked through the cityâ€™s tangle of narrow cobbled backstreets, past souvenir shops emitting the sweet smell of lavender from the pretty little bags swinging from displays and out onto the road which runs alongside the Rive RhÃ´ne. The oatmeal-coloured stone stood out brightly against the brilliant blue sky as we crossed over the road to get to the medieval bridge. Climbing the steps I could see that the bridge was quite busy with visitors, maybe some of them dressmakers and grape growers wanting to dance â€˜sur le Pont dâ€™Avignonâ€™?

I quickstepped my way through the crowd, desperate to get all the way over to the other side, since it was the view from the banking on the other side of the river that Iâ€™d seen all the postcards and in brochures and wanted to capture for myself. Faster and faster I tried to weave through the crowd, camera at the ready. After a few â€˜excusez-moiâ€™s, I emerged from the throng of peopleâ€¦ and realisedâ€¦ I was trying to cross â€˜the broken bridgeâ€™.
It was just half an hour until our coach would be departing, but not one to be defeated I did a quick about-turn back through the crowds and with a few more â€˜excusez moiâ€™s, rushed back down the steps, along the river bank to the next bridge, over the bridge and down the other side of the RhÃ´ne. Walking as fast as my legs would carry me, I jumped over the extended rods of fishermen sitting on the river bank, breaking into a run through a large group of pigeons being fed by families â€“ causing the birds to scatter in all directions â€“ and locals taking their dogs for a leisurely walk.
Back over the bridge at an even quicker pace, I made it back to the coach with time to spare and collapsed into my seat, out of breath, but happy that Iâ€™d got the shot I wanted.


Have you been to Avignon? Share your stories and comments with us! We’d love to hear from you!