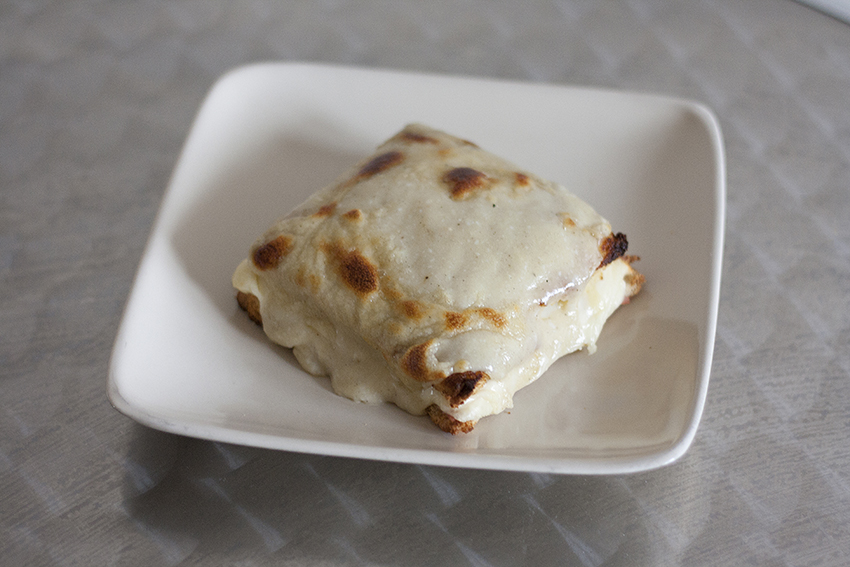 To you and I, it’s a toasted cheese and ham sandwich. But over the Channel, it becomes Croque Monsieur. Like so many other things, it sounds so much better in French, doesn’t it?

The name comes from the French verb croquet which means ‘to crunch’ and the word monsieur which is French for ‘mister’. So, in English, a ‘crunchy mister’ it is! Now you can’t tell me that sounds better than it’s French translation!
According to some accounts, the Croque Monsieur was created by accident when French workers left their sandwich tins on hot radiators, which melted the contents. Whether it’s true or not, it makes a good story! The Croque Monsieur is said to have made its first appearance in Parisien cafÃ© menus around 1910, when the sandwich was made with GruyÃ¨re cheese and thinly sliced ham. Over the years, the ‘croque’ has seen a few transformations, with the most familiar being that of the addition of mustard and bÃ©chamel sauce.
On any visit to France, you’ll no doubt see the Croque Monsieur making a regular appearance on cafÃ© menus, along with its ‘female’ counterpart: the Croque Madame. So why not bring a little bit of France to your own cuisine? Just follow this simple recipe.
(Serves 2)
â–ªÂ Â  Â 4 slices of white bread (crusts removed)
â–ªÂ Â  Â 8 thin slices of ham
â–ªÂ Â  Â Dijon mustard
â–ªÂ Â  Â Grated GruyÃ¨re cheese
â–ªÂ Â  Â Butter, softened
â–ªÂ Â  Â 1 tbsp plain flour
â–ªÂ Â  Â Milk
Preheat the grill to high.
To make the sauce:
â€¢Â Â  Â Put a large knob of butter in a pan over a medium heat.
â€¢Â Â  Â Stir in the flour, a bit at a time, to make a paste.
â€¢Â Â  Â Whisk in milk, a little at a time, until smooth.
â€¢Â Â  Â Simmer until thickened but still smooth.
Note: To make your sauce extra tasty, remove the pan from the heat and add a large handful of grated cheese to your bÃ©chamel sauce, then return to the heat and stir the cheese in until it has all melted.
â€¢Â Â  Â Season and add nutmeg, if desired.
â€¢Â Â  Â Keep the sauce warm while you prepare your sandwiches.
To make the sandwich:
â–ªÂ Â  Â Toast one side of the bread under the grill.
â–ªÂ Â  Â When lightly toasted, turn the bread over and spread mustard on the un-toasted side.
â–ªÂ Â  Â Add sliced ham and grated cheese to two slices and return to the grill until the cheese has melted.
â–ªÂ Â  Â Place the remaining slices of bread on top, mustard-side down, to make a sandwich.
â–ªÂ Â  Â With the sandwiches on the grill tray, spoon on the thick bÃ©chamel sauce.
â–ªÂ Â  Â Return to the grill until the sauce is bubbling.
â–ªÂ Â  Â Serve immediately.
Et voila!


This took me around 15 minutes to prepare (and around 3 minutes to eat!). Be warned though: the bubbling cheese has a tendency to weld itself to the roof of your mouth on contact. But it just tastes SO good, you just want to eat it!
So, IS Croque Monsieur ‘just another toasted sandwich’? I think not!
There are many other versions of this truly magnifique dish… dipped in egg and lightly fried; without mustard; without the sauce; with sliced cheese rather than grated; with cheese on top as well as inside… Give it a try and let us know your favourite!
P.S. if you want to turn the ‘Mr Crunchy’ into its female version, just add a fried egg to the top!

One Reply to “Croque Monsieur: just another toasted sandwich?”