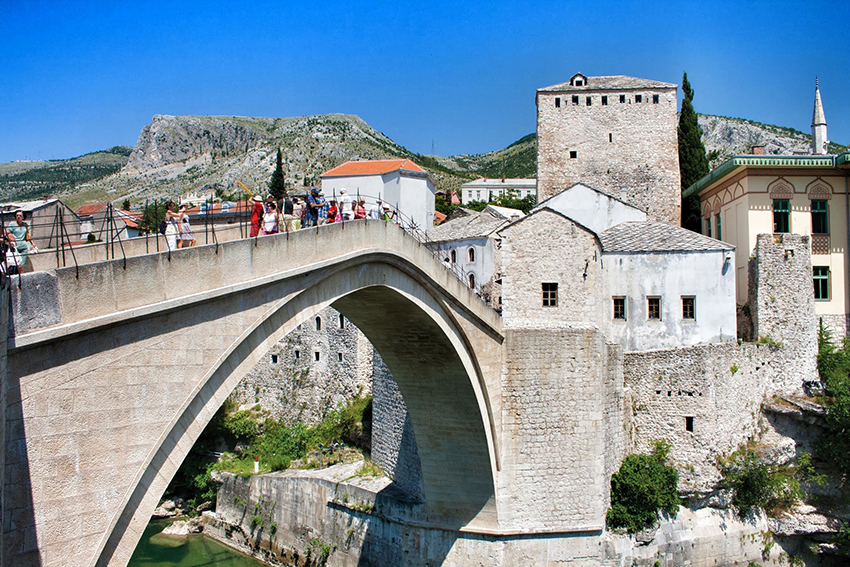 I wasnâ€™t sure what to expect from the city of Mostar â€“ all I knew about it was of the trouble in the early â€™90s, but it turned out to be one of my favourite places of my tour of Dubrovnik and the Dalmatian Coast.

I joined a guided tour to find out a bit more about the city. Situated on a deep valley of the Neretva River in Bosnia and Herzegovina, I learnt that Mostar was named after the bridge keepers who used to watch the bridge â€“ the â€˜Mostariâ€™ â€“ and it is for the large stone structure of the Old Bridge, the Stari Most that the city is well known. Itâ€™s hard to believe that just 20 years ago, 90% of the city was destroyed â€“ the Stari Most itself became a symbol of the city in the Croatia-Bosnia conflict in the early 1990s when it was destroyed, but it has since been rebuilt and now represents a symbol of unity.


The first thing I noticed as we followed our guide through the market stalls of the cobbled streets was the wonderful smell of food… that mouth-watering, smoky aroma that really gets the taste buds going. The streets of the bazaar were buzzing with chatter and shoppers browsing the colourful market stalls â€“ it was such a great atmosphere as we followed our guide past the small crooked bridge, Kriva Cuprija â€“ five times smaller than the Stari Most â€“ to the Turkish baths and the location of the tannery.

As we approached the Stari Most itself, a crowd was gathering. There, standing on top of the bridge was a young man who had just stripped down to his Speedos, pouring bottles of cold water over himself. The water wasnâ€™t just to cool him down in the 39-degree heat of the day: this was in preparation for his dive. From the 70-foot high bridge, individuals plunge into the 20-foot deep, ice cold water of the Neretva River below each day â€“ a tradition which began centuries ago. Thereâ€™s a proper diving technique used by the Mostar divers which involves jumping feet first with arms outstretched and knees bent. Another guy collected money in an overturned hat from the crowd. As the mass of people began to cheer, the man closed his eyes, paused for a minute, took a deep breath and leapt out into the air, his legs tucked up behind him and his arms stretched sideways. In a couple of seconds, he hit the vibrant green water, to the roar of the people above, and gave us a wave.

As the crowd dispersed, we followed our guide over the smooth, slippery stones of Stari Most, over to the east side of the bridge. Once on the other side we passed through the Old Bazar, the Kujundziluk. Mostar has a distinctive Turkish feel to it, with its minarets and sounds of the call to prayer filling the air five times a day. Walking along, soaking up the buzzing atmosphere of this delightful street we were surrounded by interesting stalls of decorated plates, traditional Mostar reed pipe flutes, woven shepherdâ€™s bags, embroidered tablecloths, wonderful copper works, handmade jewellery, colourful paintings, and bright, traditional shoes with pompoms â€“ it really is a shopperâ€™s heaven. Further along, we passed grey, stone buildings which still bear the scars of the heavy bombing of the early â€™90s.


Our next stop was the Turkish House â€“ Biscevicâ€™s House â€“ a beautiful, old Ottoman-style building and a real gem. In the courtyard, surrounded by high walls (to protect the females of the house from any prying eyes) was the â€˜fountain of lifeâ€™. The 12 holes in the top of the metal fountain represent the 12 months, four metal jugs below represent the four seasons and the three stone globes surrounding the fountain at the bottom represent birth (the stone facing the house), life (the stone facing Mecca) and death (the stone which faces the exit of the house). We slipped off our shoes and entered the well-preserved, 16th century building where our guide told us some wonderful stories about the way of life here, which also involved me modelling the traditional clothes worn by the houseâ€™s tenants â€“ a pair of â€˜one-size-fits-allâ€™ bright red, silk harem pants made from 6 metres of fabric (the ankles of which our guide pulled up around my knees), a short-sleeved, patterned shirt and a white scarf for my head â€“ much to the amusement of the group!

Leaving Biscevicâ€™s House, I used my free time to explore the places weâ€™d already passed a bit more. It was wonderful strolling along Coppersmithâ€™s Street, through all the different stalls selling colourful scarves and shoes, lots of handmade jewellery, embroidered hats and cushions, hammered copper decorations and little decorated metal pots which were too hot to touch in the heat of the dayâ€™s sun. Despite so many stalls fighting for business, there was no pressure to buy or even to look, but it was hard not to do either! â€œI have more boxes inside that arenâ€™t so hotâ€ said a young girl, as she flashed me a friendly smile.

Heading back towards the Stari Most, originally built by the Turkish architect, Hairuddin, I could see the Halebinovka and Tara towers â€“ the watch towers which stand at each end of the Old Bridge â€“ being lit by the afternoon sun. The original bridge, completed in 1566 after nine years of construction, was rebuilt in 1997. Stones from the destruction of the bridge in the early â€™90s were pulled from the Neretva River below to be used in the bridgeâ€™s reconstruction. Unfortunately, they were too damaged by grenades, shrapnel and bullets to be made use of, so stones were brought in from the same quarry used by Hairuddin for the original bridge. In 2003-2004 the bridge was rebuilt, and today looks like it did before the war, standing almost 70 feet high, 97 feet long and almost 15 feet wide. Now, this whole area is protected by UNESCO.
Further along, returning over the bridge and along Onescukova, I encountered the source of the wonderful, smoky aroma â€“ lots of inviting eateries offering Mostarâ€™s mouth-watering traditional cuisine. Our guide, Tangra, had recommended that we try the local dish: cevapcici â€“ grilled mince meat, like a type of kebab, formed into sausages. Itâ€™s actually pronounced â€˜chewapchiechieâ€™, but Tangra told us â€œjust ask for chichichichi â€“ theyâ€™ll know what you meanâ€! In no time at all, the lively waitress â€“ singing as she went and wearing brightly-coloured harem pants, a white blouse and a black, embroidered waistcoat â€“ served me my â€˜chichichichiâ€™… the 8 â€˜sausagesâ€™ came with flat bread, chopped, raw onions and â€˜ajvarâ€™, a spicy relish made of peppers, aubergine and chili pepper â€“ very tasty and definitely well recommended!
In no time at all, my short trip to Mostar had come to an end, but it had really left its mark as one of my favourite places of the trip.
Have you been to Mostar? Share your stories with us here.

4 Replies to “Mostar: where itâ€™s quite normal to see someone jumping off a bridge!”