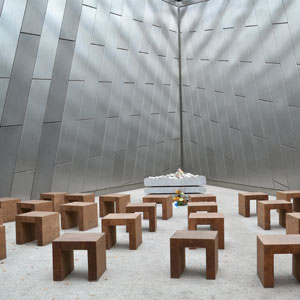 Having wanted to go on Legerâ€™s Story of Anne Frank and Oscar Schindler battlefields tour for quite some time, Linda and David Barrington-Smith found it was certainly an experience to remember.

Linda is a Freelance Journalist and David is a professional photographer. They have both travelled with Leger Holidays before and this time they have kindly written an article about their experiences whilst on our tour – The Story of Anne Frank and Oscar Schindler.

On January 20, 1942 in the dining room of a beautiful lakeside villa in the Berlin suburb of Wannsee, 15 high-ranking representatives of the SS, the NSDAP and various ministries met for a conference, chaired by Reinhard Heydrich, to discuss and co-ordinate the implementation of what they called â€œthe final solution of the Jewish questionâ€. The â€˜Final Solutionâ€™ being the code name for the systematic, deliberate, physical annihilation of 11 million Jews in Europe.


While the enormity of the European Holocaust can be very emotive and hard to take in, Legerâ€™s The Story of Anne Frank and Oscar Schindler battlefield tour helps bring into perspective the events of that terrible period in European history.
The tour is one that we had wanted to take for quite some time. So when the opportunity finally arose, we didnâ€™t hesitate!
The local pick-up arrangements for the trip down to Dover, where we met up with our excellent tour coach drivers Dave and Gary and specialist historical guide Richard Bass, went smoothly, as did the journey to the first overnight stop.
Day two saw the tour start to follow the story of the Frank family with a visit to the Anne Frank House and museum in Amsterdam.
For just over two years Anne Frank and her family hid in the Secret Annexe of the canalside house at Prinsengracht 263 where Anneâ€™s father, Otto Frank had his business.
A bookcase marks the entrance to the annexe, reached via several flights of steep stairs, which they shared with four other Jews.
Although today the rooms are sober and unfurnished, they still breathe the atmosphere of that period of time.
Anne, who was 13 when the family went into hiding, wrote her now famous diary in the annexe. Quotations from this, as well as historical documents, photographs, film images and artefacts illustrate the events that took place here.
On August 4, 1944 the occupants were betrayed and deported to various concentration camps. Only Otto Frank survived the war.
After our visit, the tour continued to Hannover for an overnight stay.

The next day we paid our respects at Bergen-Belsen where Anne Frank and her sister Margot died of typhus in March 1945, only a few weeks before liberation.
Today, Bergen-Belsen is a place of remembrance â€” a tranquil cemetery with mounds of mass graves containing more than 70,000 people and various memorials â€” including one dedicated to Anne and Margot Frank.
We have visited the site before, but at that time the new Documentation Centre hadnâ€˜t been opened. A forbidding concrete building, designed to make one aware that Bergen-Belsen was not a pleasant place, we spent quite a while looking at the excellent exhibition. Packed with information, videos, photographs and personal belongings excavated after liberation, it graphically tells the story of the people that worked, died or somehow survived at the camp.
Next stop was Berlin.
The first day in the German capital was spent studying the â€˜Final Solutionâ€™, starting with a visit to Sachsenhausen Memorial and Museum.
Established as a concentration camp in 1936, up until 1945 more than 200,000 people from all over Europe were imprisoned here; tens of thousands died from hunger, sickness, forced labour and abuse, or were victims of systematic extermination.
Liberated by Soviet troops in April 1945, the freedom was short-lived as the Soviet secret police turned it into a prison camp and the misery and death continued for another five years.

Several buildings and structures survive or have been reconstructed, including the camp entrance, guard towers, cell block, small gas chamber and crematory ovens.
After this sobering visit, a walk was taken across the Glienicke Bridge, where East and West swapped spies during the Cold War, before going on to the House of the Wannsee Conference.
Our second day in Berlin was packed. Starting off at the Berlin 1939-1945 War Cemetery, we then visited the Olympic Stadium before continuing to the PlÃ¶tzensee Memorial Centre, in the old prison yard behind the modern day prison, where among nearly 3000 people executed here were some of the July 1944 plotters. The execution chamber still houses the original gallows.
After this chiller we saw the German Resistance Memorial Centre, located in the historic section of the former headquarters of the Army High Command at the Bendlerblock. It was here that Colonel Claus Schenk Graf von Stauffenberg and other members of the failed attempt to assassinate Hitler on July 20, 1944 were shot by firing squad.
Then it was on to the Topography of Terror Documentation Centre with exhibitions illustrating the European dimensions of the Nazi reign of terror.
After seeing the site of Hitlerâ€™s Bunker, we finished up at the Memorial to the Murdered Jews of Europe. Designed by New York architect Peter Eisenmann as a Field of Stelae containing 2711 stark concrete blocks, it is only by walking among them that the powerful atmosphere of this memorial can be felt.
Next day the tour travelled on to Krakow in Poland.
The first day in this beautiful city we strolled through the old narrow streets of Krakowâ€™s Kazimierz district, which still retains a unique atmosphere of its Jewish past. After the ravages of the Second World War the area became run down. But in recent years it has become a thriving district once again, thanks in part to Steven Spielberg’s Oscar-winning film Schindler’s List.
Next stop was PodgÃ³rze, site of the former Jewish Ghetto between 1941 until 1943 and from where the Jews were deported to the nearby PlaszÃ³w Concentration Camp and other death camps. Today, the main square has been turned into an evocative memorial to the victims of the Krakow Ghetto, laid out with 70 large bronze chairs symbolising departure as well as subsequent absence.
Close to the ghetto lies Oscar Schindlerâ€™s Factory of Enamelled Vessels Emalia, used by Schindler in his remarkable attempt to save the lives of his workforce. It has been turned into a modern museum with ingenious exhibitions combining period artefacts, photographs and documents with multimedia and set-piece arrangements to create a full-immersion experience of life in Krakow from pre-war until after liberation.

Oscar Schindler, his factory, and the fate of its Jewish workforce feature prominently. The main part of the exhibition dealing with Schindler himself is his office which retains original elements of the interior in the shape of architectural detail and a 1940s map of Europe with city names in German.
Opposite a desk from the period, with an arrangement of Schindlerâ€™s family photos, is a stunning glass cube filled with metalware. The walls of the metal cylinders inside the cube bear the names of around 1100 Jews saved by Schindler.
Afterwards the tour headed for PlaszÃ³w Concentration Camp, a windswept park where all traces of Nazi atrocity have been erased. But we did manage to see the house that the campâ€™s notorious commandant Amon GÃ³th lived in and the PlaszÃ³w Memorial, dedicated to the victims of the camp.
Next day was spent at the Auschwitz-Birkenau complex â€” a symbol of terror, genocide and the Holocaust around the world. The total number of victims at Auschwitz between 1940-1945 is estimated at between 1.1 and 1.5 million people, around 900,000 thought to be Jews.
The Auschwitz-Birkenau State Museum includes two sections of the camps â€” the brick buildings of Auschwitz I and the immense concentration and death camp at Auschwitz II (Birkenau) three kilometres away.
Some of the most chilling exhibits at Auschwitz I, set behind protective glass, must surely be the cans of Zyklon B used in the extermination process, tons of human hair, suitcases with names and addresses of deportees, shoes, artificial limbs, spectacles, childrenâ€™s toys and clothing â€” which make pretty powerful viewing.
While there is less to see at Birkenau, its size and solitude makes it more deeply moving than Auschwitz I with its thousands of daily visitors.
At Birkenau one can see the watchtower, railway line and selection ramp â€” images well-known from documentary films and books; remnants of four crematoria, gas chambers and cremation pits, all of which make a profound impression on everyone who visits the camp.
Leaving Poland an overnight stop was made in Prague in the Czech Republic, where we saw the site of Reinhard Heydrichâ€™s assassination. Then it was on to Nuremberg for a look at the Courthouse where the Nuremberg Trials took place, before travelling through the Rhine Valley on our way to Calais and the ferry home.
Although our epic 4570 kilometre journey was emotional at times, there were lighter moments â€” a free jazz concert in Celle, dancing to a pop concert at the Brandenburg Gate in Berlin and a cruise on the Rhine among them.
It was certainly an experience to remember.
Keep an eye in your local newspapers and magazines for further details about this thought provoking tour from Linda and David Barrington-Smith