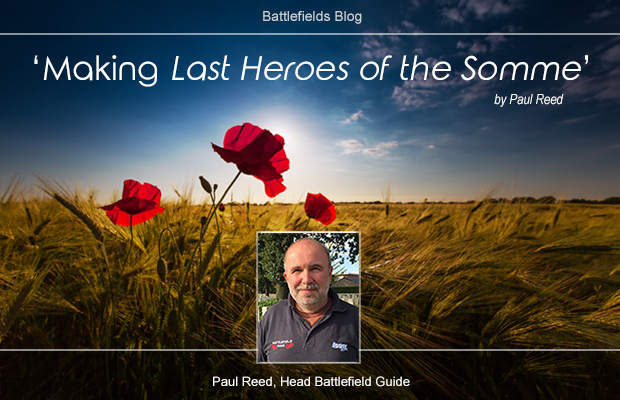 Aside from working as Head Battlefield Guide for Leger Holidays I have also been involved as an advisor and contributor to television documentaries for the past fifteen years.

I work regularly with former BBC Producer John Hayes Fisher, and together we have made documentaries like Last Day of WW1 with Michael Palin, Dig WW2 with Dan Snow and WW1 Tunnels of Death about battlefield archaeology in Flanders.


My job as part of this is make sure the history is right, find John some good locations to film, some interesting stories to tell, and source interesting contributors to work with. John then does the hard work of turning it all into a television programme, and we are also lucky to work with first class crews who also help make that possible; the hard work and professionalism of cameramen and sound crews are often overlooked.

The current project, which will be broadcast at 7pm on Channel 4 on 13th November, is entitled Last Heroes of the Somme. Much of the TV coverage of Somme100 this year focussed on the beginning of the battle and 1st July, when so many died. But we thought it would be interesting to look at the end of the battle in November 1916 especially as Remembrance Sunday fell on the centenary of the Battle of the Ancre.
We spent the first few months of working on the programme out on the battlefields; walking and driving around the area associated with the attack on 13th November; from Serre in the north to near Thiepval in the south. This gave some ideas of how it would be filmed and also valuable time to think about potential stories, which soon lead us to contact our extensive network of WW1 experts.

We knew tanks had been used in the battle and thanks to WW1 Tank expert Stephen Pope we were able to trace the story of a tank that helped save the day at St Pierre Divion on 13th November, and find a relative of one of the crew who died. Using modern mapping technology, we were even able to work out where the tank had come to grief having broken through the German trenches.

Back in the 1990s I had carried out a lot of research on the Hull Pals, and following some trips back to the city we quickly realised that their attack at Serre on 13th November 1916 had been as deadly for them as for the Accrington, Barnsley, Bradford, Leeds and Sheffield lads on the same spot on 1st July. Incredibly we found 100-year-old Muriel in Hull, whose father had died at Serre in that very attack; one of the last handful of children whose father had died in the Great War. Her part of the story is very moving indeed.

We filmed the programme in some of the hottest weather this summer but it made the Somme battlefields look stunning, and the drone footage we took as part of the filming certainly does some justice to how the battlefields look today. It was good to work with so many old friends on the project too, such as contributors and researchers like Professor Peter Doyle and Rob Schaefer (who guides our Fritz and Tommy tours). I was also able to bring in the Stockdale family from Kent; Frank Stockdale is a former tank driver who I have known for many years and his great uncle was killed in the 13th November 1916 battle at Hamel. He brought his young family over and as part of the film we were able to shed new light on what had actually happened to him; showing that we still really do have new things to learn about the Great War.

Making television programmes is not as easy as it may appear to some (just like battlefield guiding!), but in Last Heroes of the Somme I hope we have done justice to the often-forgotten end of the Battle of the Somme and shown that you can make a family history programme involving ordinary people without having to use celebrities; after all the Great War was in essence about ordinary men in extraordinary circumstances, and honouring that legacy is as important on the screen as when we do it on battlefield tours.