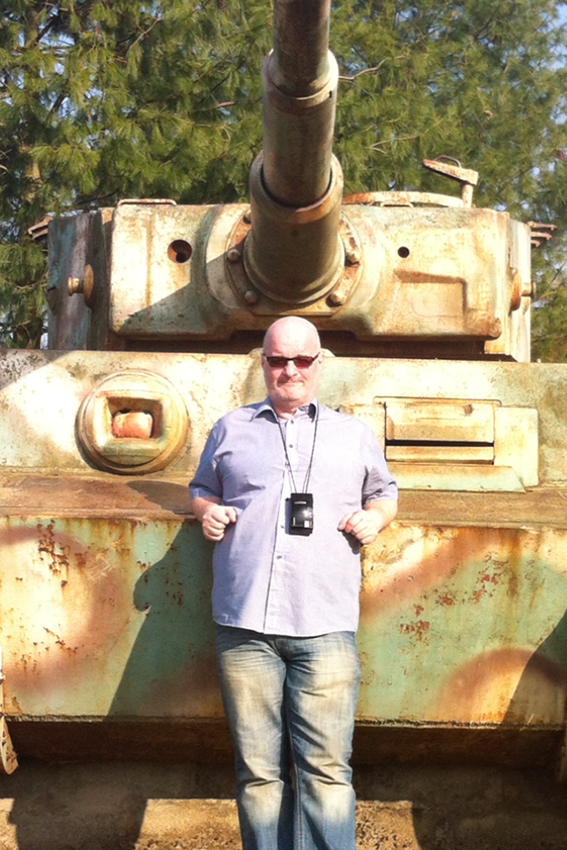 Paul Prendergast shares his experience of the D-Day Landings in Normandy tour, his second Battlefields tour with Leger.

DAY 1
The first day of our Battlefields tour started with a noon pick up at Pease Pottage service station. It was a smooth journey down to Dover where we had the changeover onto our coach onward to the Battlefields of Normandy. Whilst at Dover I had the chance to have a quick chat with Paul Reed, the Leger Head Battlefields Guide â€“ this man is without a doubt a great Military Historian and his knowledge is boundless. It was a real pleasure to meet him and shake his hand. We arrived in Calais with no problems. On the four-hour drive to the beaches of D-Day the journey was quick and pleasant and Mark and Dave â€“ our drivers â€“ were friendly, smart and willing to help. Our guide for the trip was Bill McQuade. He told us what to expect on each day of the tour. Again, his military knowledge was boundless and he answered any questions with no problems.

DAY 2
We set off at 08.30am to Pegasus Bridge. It was great to actually walk on the bridge â€“ just to think, this was the point that the heroes started to fight to free Europe and get back the freedom to the people of France. We also went to visit the GondrÃ©e CafÃ© which was the first place to be liberated in France. I found it quite remarkable that a small band of men risked so much on this bridge. We stopped for lunch at a small cafÃ© just next to the bridge before going to Sword Beach â€“ Queen’s sector. This is where the British landed. We also stopped to see a statue of a piper who led the soldiers into battle playing â€“ this was at Hermanville which is twinned with Tangmere in West Sussex where a Battle of Brittan RAF squadron was based. We then visited the Juno Sector of the beach which is where the film Dâ€“Day was actually made and then went to see a memorial to the 7000 Canadians that landed on the beach, before moving on to the Juno Centre â€“ a fantastic place to look around at pictures and artifacts. I sat in a small cinema with a small group of people from our group and also a group of children from Canada. The film showed actual battlefield dead and casualties, and as we left the cinema I found some of the children crying. I asked if they were OK and one of them told me that it had brought it home to them what really happened. I found it quite touching that children from today realise what these men gave up. We then visited an underground bunker which was in very good condition â€“ it still had the small stove and cots in it. We then went to Mulberry B. We couldn’t see a lot due to the mist on the sea, and can only imagine how it was on 6th June 1944.

DAY 3
Our day began with a very misty drive down to Bloody Omaha, the American sector of the D-Day landings. We started our day at the American War Cemetery at Omaha. I have never visited any other cemeteries apart from the British ones and I didn’t know what to expect. On arrival there were immaculate white headstones as far as the eye could see. Buried in this place are a few people who I would like to mention: Robert A Niland, killed 06/06/44 and Preston Niland, killed 07/06/44 â€“ two brothers killed within a day of each other and on whom the film Saving Private Ryan is based. Also, Theodore Roosevelt Jnr., killed 12/07/44, son of the American President.
Walking around this place bought chills to me and brought home the price that these men paid for my freedom today. Then it was on to the Overlord Museum. This had some fantastic pieces of kit in it to look at close up, ranging from a Panzer Tank to Sherman Tank and personal belongings of British and American soldiers. We then went down onto the actual Omaha Beach. I can’t imagine the mayhem and slaughter the Americans must have gone through on the landing day. I went up a small path which lead to a small German bunker which likely held a machine gun because of the vantage point down on to the beach. We then went to Utah Beach to a fantastic little place where you could have look around and actually see what happened on the day. My favourite part of Utah Beach was when I found a few German bunkers that you could actually go into. We then stopped at a statue of Dick Winters â€“ he was one of the Band of Brothers. We stopped at a tribute to the 101 Airborne Division, otherwise known as Easy Company, made famous by a TV series by Stephen Spielberg. 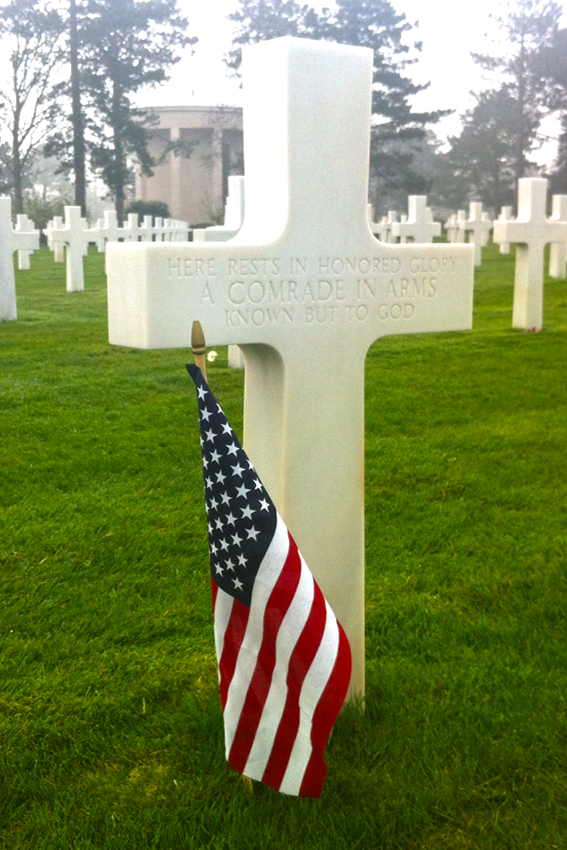 The last trip of the day was to a German War Cemetery. I didn’t know how I would feel about this because I’ve never visited one before. It contained about 8000 soldiers of all ranks. What was also shown to me by our guide was the grave of Michael Wittmann and his tank crew. He was one of the most daring commanders of his time and he died and was buried with his crew. I walked around the cemetery and noticed no headstone standing upright and the lack of flowers on any graves. I asked Bill, our guide, why this was. He said it was that a ‘Spirit of the Forest’ approach is taken to death in Germany, hence the lack of flowers â€“ only firs and ferns on some graves. In the British cemeteries, any soldier that is not known and buried is marked with the words ‘Known But To God’. Here nothing. All it said was Ein Deutscher Soldat â€“ A German Soldier. I found it simple but quite touching. A very thought-provoking end to the day. 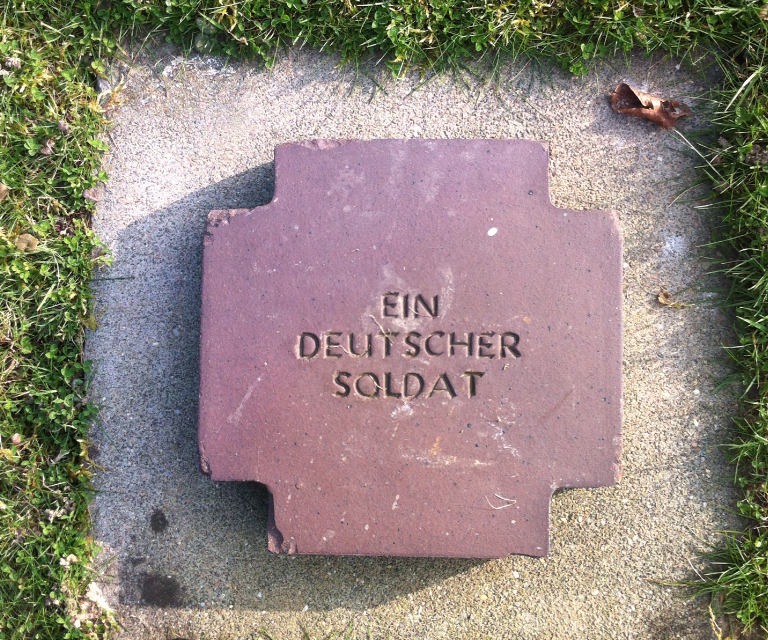 Day 4
We set off on another misty day to visit Jerusalem Cemetery, a very small place with only 48 buried at the cemetery. I found a grave of J Banks DLI who died on the 21st July 1914Â aged just 16. How can a child die like that because he wanted to do the right thing for King and Country? We stopped to take some photographs of a memorial to the 49th West Riding Division and then onto the Scottish Corridor and Hill 112 to look at a Cromwell tank. Unfortunately, we couldn’t see much from the top of the hill due to the mist. We stopped off in a town called Falaise for lunch â€“ this town is famous for being the town where William the Conqueror was conceived â€“ before going to Mont Ormel, known as The Polish Battlefield. We also went to a small but fantastic museum which had great artifacts and also a fantastic view of where the German retreat took place. The group’s last stop was at a National French monument which is a tiger tank abandoned by its crew. We had a group photo taken by Bill.
The thoughts on my first Leger WW2 trip? Simply fantastic. Our guide, Bill McQuade’s knowledge was amazing and all our questions were answered. His passion for his subject is simply wonderful. Our drivers, Mark and Dave were safe drivers, always helpful and well turned out. With the 70th anniversary of D-Day fast approaching, I would recommend this trip without a doubt.
This was my second trip with Leger in under six months â€“ my first was All Quiet on the Western Front â€“ and I’ve enjoyed them both. Which one next? Verdun? Fritz? Tommy? Who knows, but whichever one I book, I know it will be great.