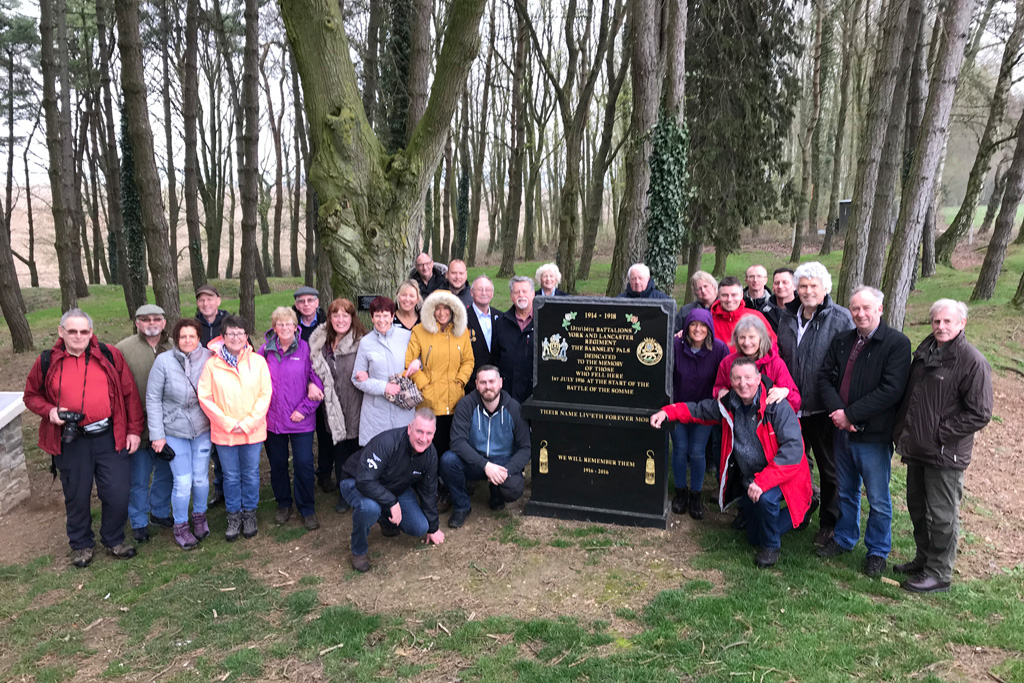 Our Head Battlefield Guide, Paul Reed has lived in the South Yorkshire former mining village of Elsecar for the past couple of years. In this blog he documents his experience of guiding a dedicated group tour, taking patrons of his local to the battlefields to discover the stories of the Barnsley Pals.

Elsecar is situated on the edge of Barnsley, close to the countryside, and near the impressive Wentworth Woodhouse stately home, whose owners built the local colliery and many of the houses here.

The Milton Arms pub, in the heart of Elsecar, is my local and I was delighted when the landlord, Phil, approached me to organise a tour to the battlefields. Having travelled with a few friends on a battlefield tour on one of our Luxuria coaches, he wanted to return and do his own thing with a group from the pub. 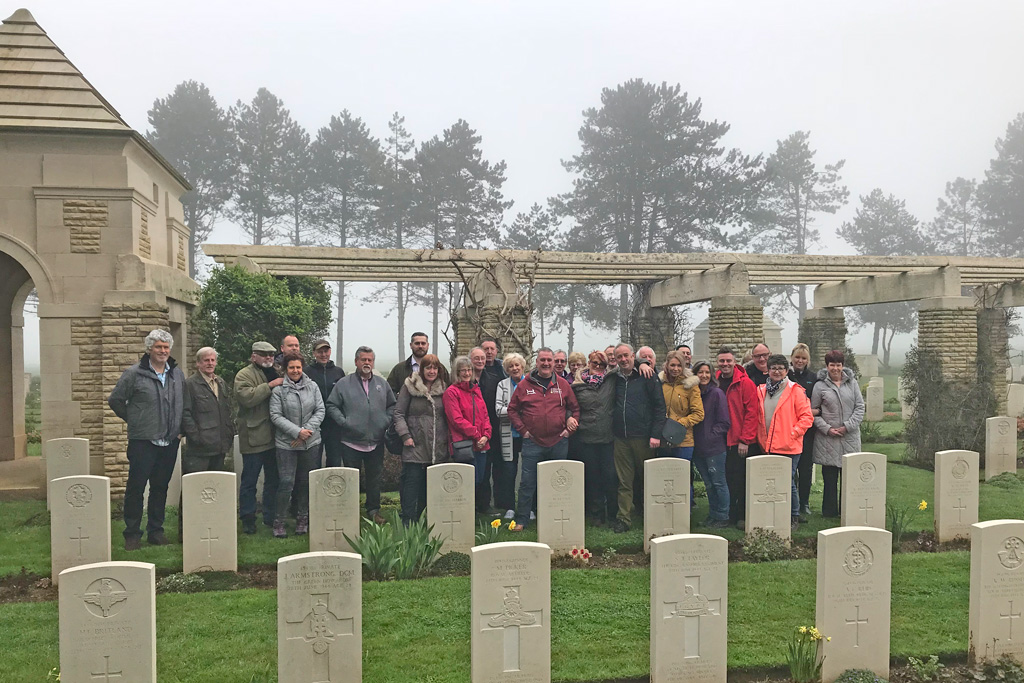 One of the great advantages of bringing a group booking to Leger is that you don’t have to book a brochure tour. With our help and advice you can discuss what you’d like to do and we offer our expertise and make it possible. Phil wanted to remember some local heroes from both World Wars, so it was decided that we would travel direct from Elsecar to the Somme, have a night in Northern France, and then move on to Normandy to look at D-Day and the battles of 1944.

We started early from Elsecar with a good supply of pork pies and plenty of drinks stock on the Luxuria coach, with drivers, Adam and Paul looking after us. Getting across to France early, we made our way down to the Somme and made our first stop at the Thiepval Memorial where several members of the group had relatives commemorated on the panels dedicated to the Missing of the Somme. From here we went on to Serre and had a gentle stroll up onto the battlefield where the Northern Pals battalions were all but wiped out on 1st July 1916: the First Day of the Somme. 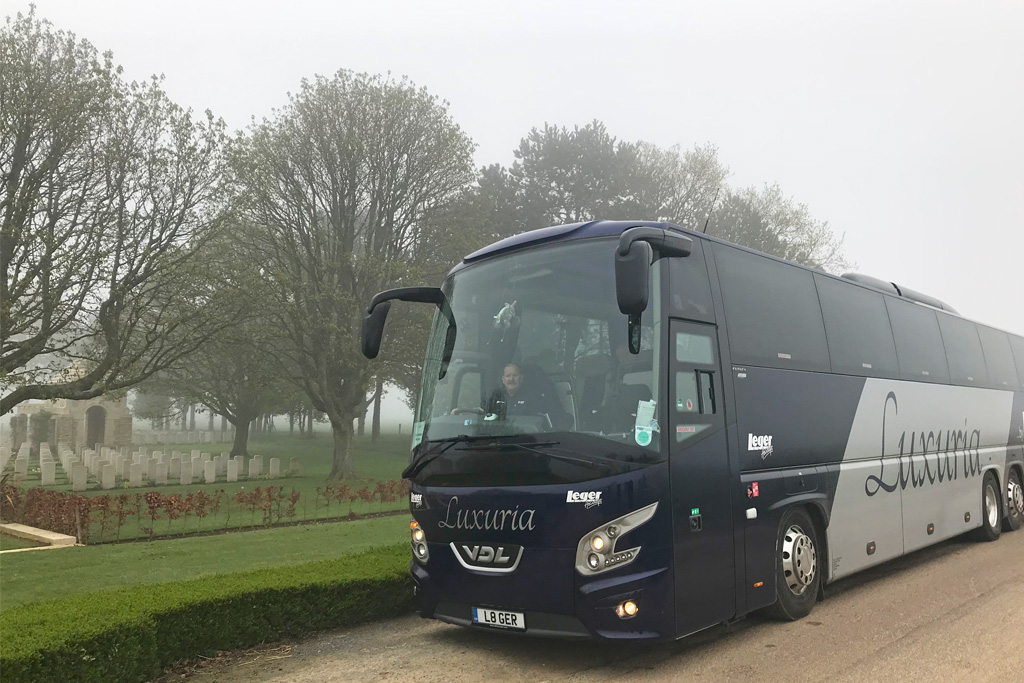 Our own village had many men from the Barnsley Pals who were here that day and the group assembled around the memorial to the Barnsley lads, which was rededicated on the centenary of the battle in 2016. Elsecar to Serre in a day – so simple now, but a centenary ago, the gulf between those at home and those at the front was immeasurable.

After an excellent night staying in Arras, with its amazing main square and great restaurants and bars, we headed down to Normandy to look at the story of D-Day and the Battle of Normandy. Over the course of the next few days we visited all five D-Day beaches, saw where American and British Airborne dropped in, and for many, the highlights were seeing ‘Bloody Omaha’ where so many GIs were killed on 6th June 1944, and walking across the original Pegasus Bridge. You can see these on the screen, but there is nothing like being there and seeing it for yourself. 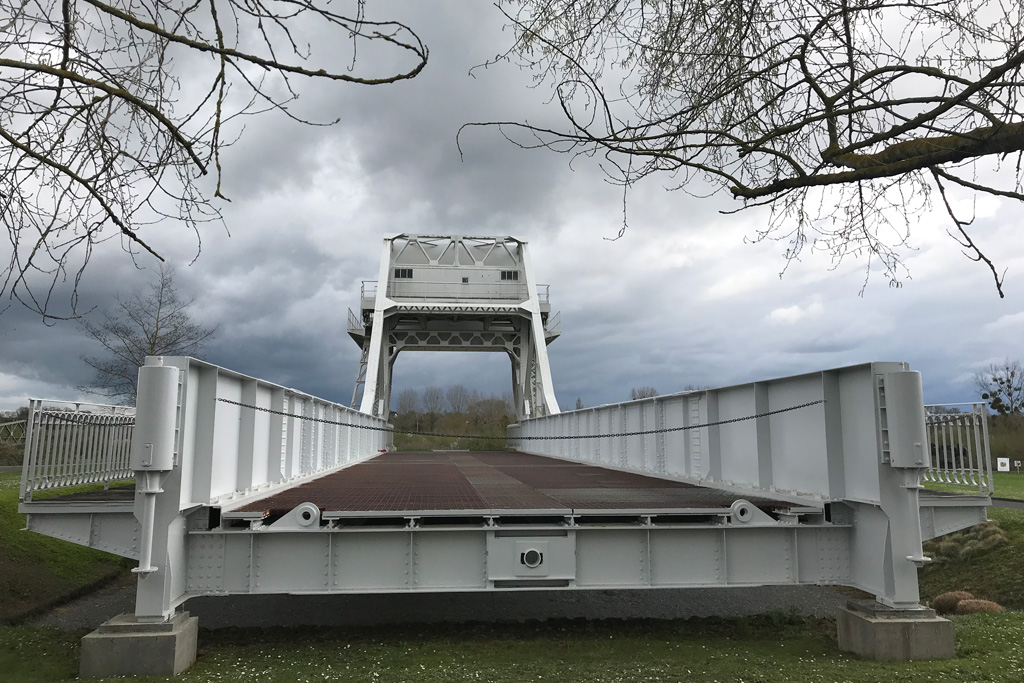 As part of the D-Day tour we made a special visit to two Elsecar men killed in Normandy: one at Ranville, who was killed as a tank crewman and another at Ryes, who was an Assault Engineer. Again, it was great to have that local connection, and we were probably the first people from the village to ever stand at their graves and remember. The highlight of the week, for many, was at Hill 112 where Phil, and Chaplain Andy, led a Service of Remembrance. A veteran of the battle here had visited Phil in the pub and asked if we could remember his mates when we came, and it was a special pleasure and honour for us all to do this.

Group tours like this are unique: from planning to visiting the battlefields, those who organise are in total control over what they do and where they go, and have our years of knowledge to fall back on to make it a tour to remember.