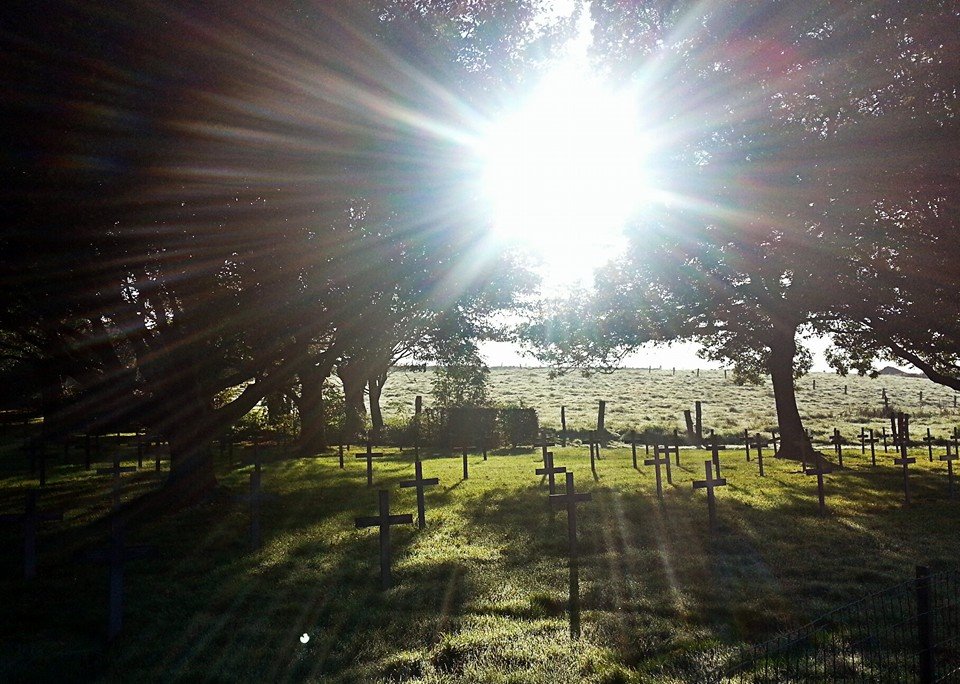 I have been visiting the battlefields of Flanders and the Somme for nearly 20 years, but this is the first time ever where I sincerely doubt if all the suffering was worth it.
This moving remark was made by one of our guests on the last day of the â€˜Fritz and Tommyâ€™ Battlefield Tour in October and was certainly one of my personal highlights this year.

I had the pleasure to guide two of these tours in September and October, working side by side with Leger guides Paul Reed and Marc Hope, leading the guests to German sites in Flanders, Northern France and the Somme
Visiting battlefields, cemeteries and forgotten German memorials, following in the footsteps of Ernst JÃ¼nger and the young Adolf Hitler, then a corporal in the Royal Bavarian Reserve Infantry Regiment No. 16, looking at German military, funeral and mourning traditions, organizational details and telling stories and anecdotes of the German army and the units that fought in the places we visited. How did Fritz, the German soldier experience the Great War and what were the joint experiences of Fritz and Tommy. What set them apart and what united them. 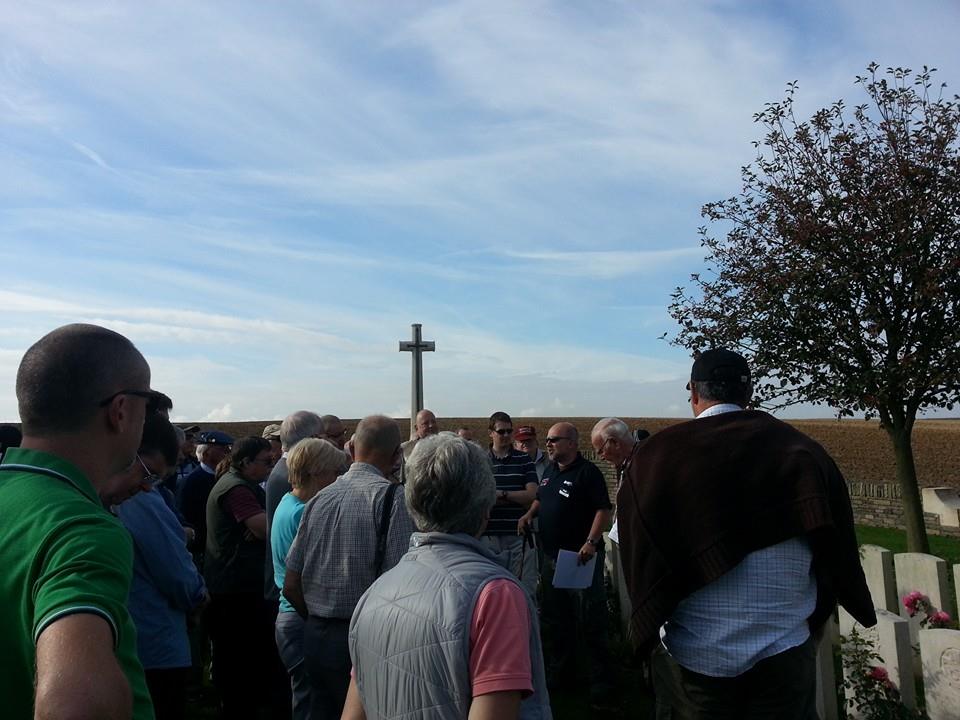 The first day on the battlefields was spent in Flanders. For the German men that fought in the war Flandern was a byword for sacrifice and suffering and we went out to look at how Germany commemorated her dead in that area, visiting the German cemeteries at Vladslo and Langemarck, a virtually forgotten German regimental memorial and looking at the â€˜Langemarck mythâ€™ and its importance to the propaganda of the National-Socialists.
After that we examined the pivotal fighting around Gheluvelt, the key to Ypres, on the Menin Road. Here we used letters and diary extracts of German soldiers from WÃ¼rttemberg and Bavaria that fought in and captured the village in November 1914 before switching our sights to the desperate and decisive counter charge of the 2nd Worcesters.
After lunch at Hooge Crater CafÃ© we visited Bayernwald to see the German trench system there, an ideal place to talk about the undying myth that German trenches were generally better than their English counterparts and to have a closer look at German and British mining techniques.
At Messines we visited William the Conquerorâ€™s mother in law and looked at the story of Herr Hitler again, reading an account of how his battalion celebrated Christmas in the church and crypt in December 1914 before finishing the day visiting a German officerâ€™s grave on a British cemetery to tell his sad and fascinating story. 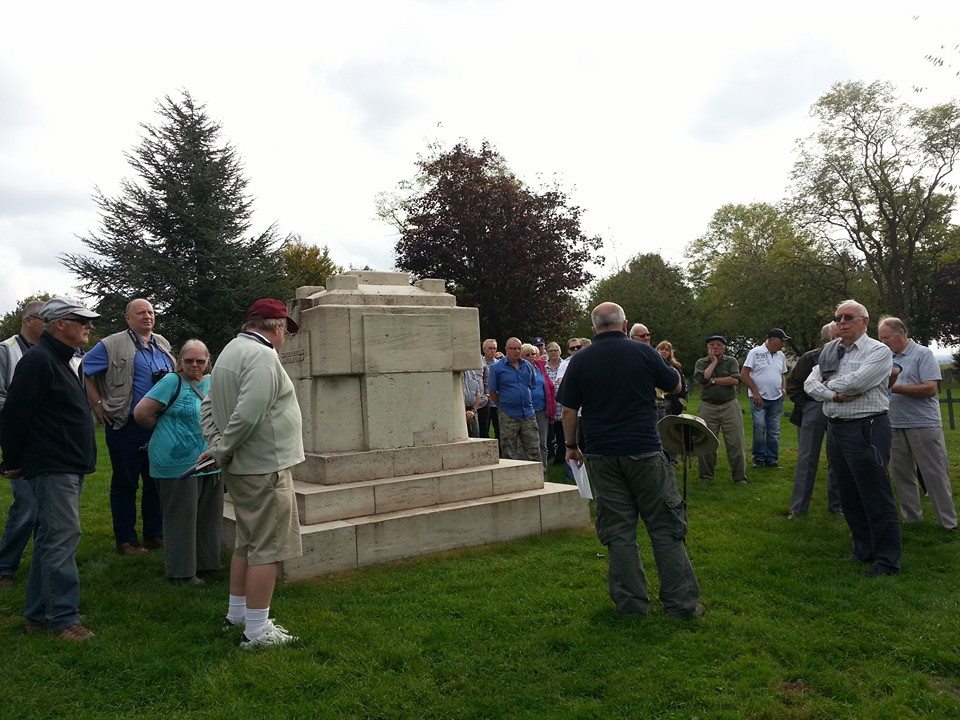 Day three led us to northern France to the sad German cemetery at Wervicq before exploring the Frommelles battlefield from both sides, looking at its German defences and talking about the first clash between German and Australian troops and how that event influenced the catastrophic outcome of the Battle of Frommelles. One of my highlights of the September tour was certainly the visit to the huge mass of individual graves that forms the military cemetery of Neuville St. Vaast, where 44888 German soldiers from more than a hundred different divisions from all provinces and counties of Germany are buried. Here Paul Reedâ€™s soulful recitation of a letter written by a German veteran to the famous British war poet Henry Williamson left everyone, including me, speechless and lost for words. A misty-eyed moment and a truly moving experience I will never forget.
Day four was spent on the Somme starting at Copse 125 or Rossignol Wood, where the famous German stormtrooper-writer Ernst JÃ¼nger fought in 1918 opposite New Zealanders including the â€˜King of No Manâ€™s Landâ€™ Dick Travis V.C. DCM MM. Among highlights of that day were our stops at Hawthorne Ridge and Sunken Lane as here we were able to deliver a most detailed account of the slaughter that happened there on 1 July 1916.
An ideal location allowing people to immerse themselves in the story told.
Highlighting the experiences of attacker and defender alike, reading accounts from both German and English soldiers that had fought there that day and finishing the presentation off inside the bus, with lights dimmed, watching Malins’ famous footage of the explosion of the mine, Sunken Lane and the attack on Hawthorne Ridge. 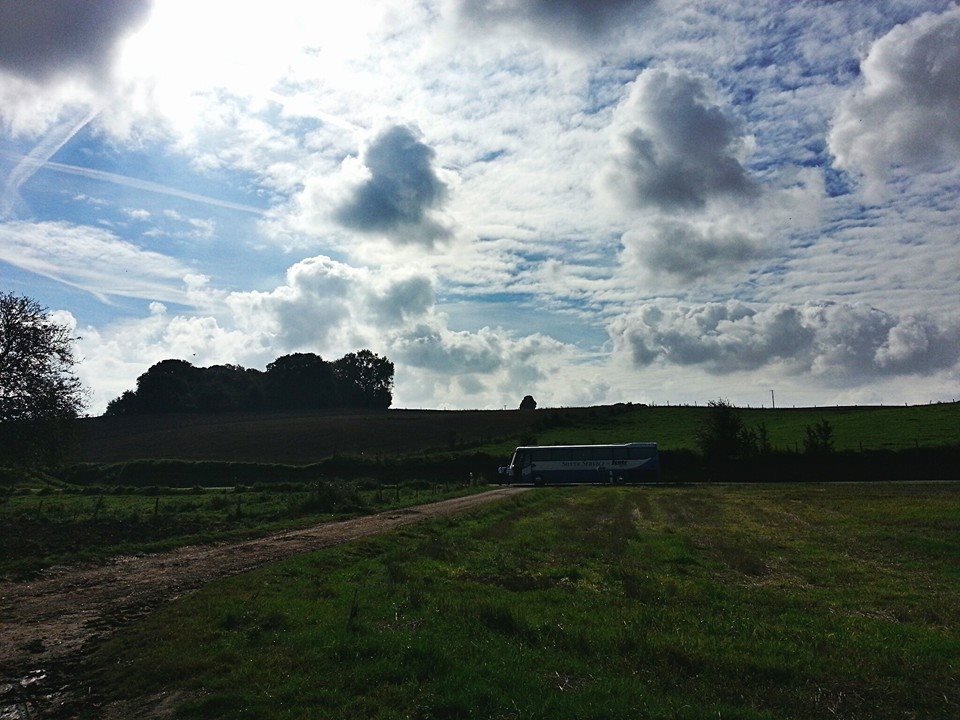 To stand in the middle of where it all happened and to know what exactly happened there on the German side and the English side left a lasting impression on everyone. After visit to Courcelette the days on the Somme ended at Guillemont where we returned to Ernst JÃ¼nger and his harrowing descriptions of the fighting there in 1916.
I was positively surprised about amount of interest in the groups and even after the official end of each day I continued answering questions in lively debates over many a glass of Belgian beer, sometimes up until deep in the night. For me personally these tours have been commemorative events in their own right. A hundred years have passed since Fritz and Tommy fought each other in four horrible years of suffering and pain.
Now in 2014, we, their ancestors are able to travel the battlefields together, walking in their footsteps as friends. How lucky we are.

Nie wieder Krieg! Fritz and Tommy – We will remember them