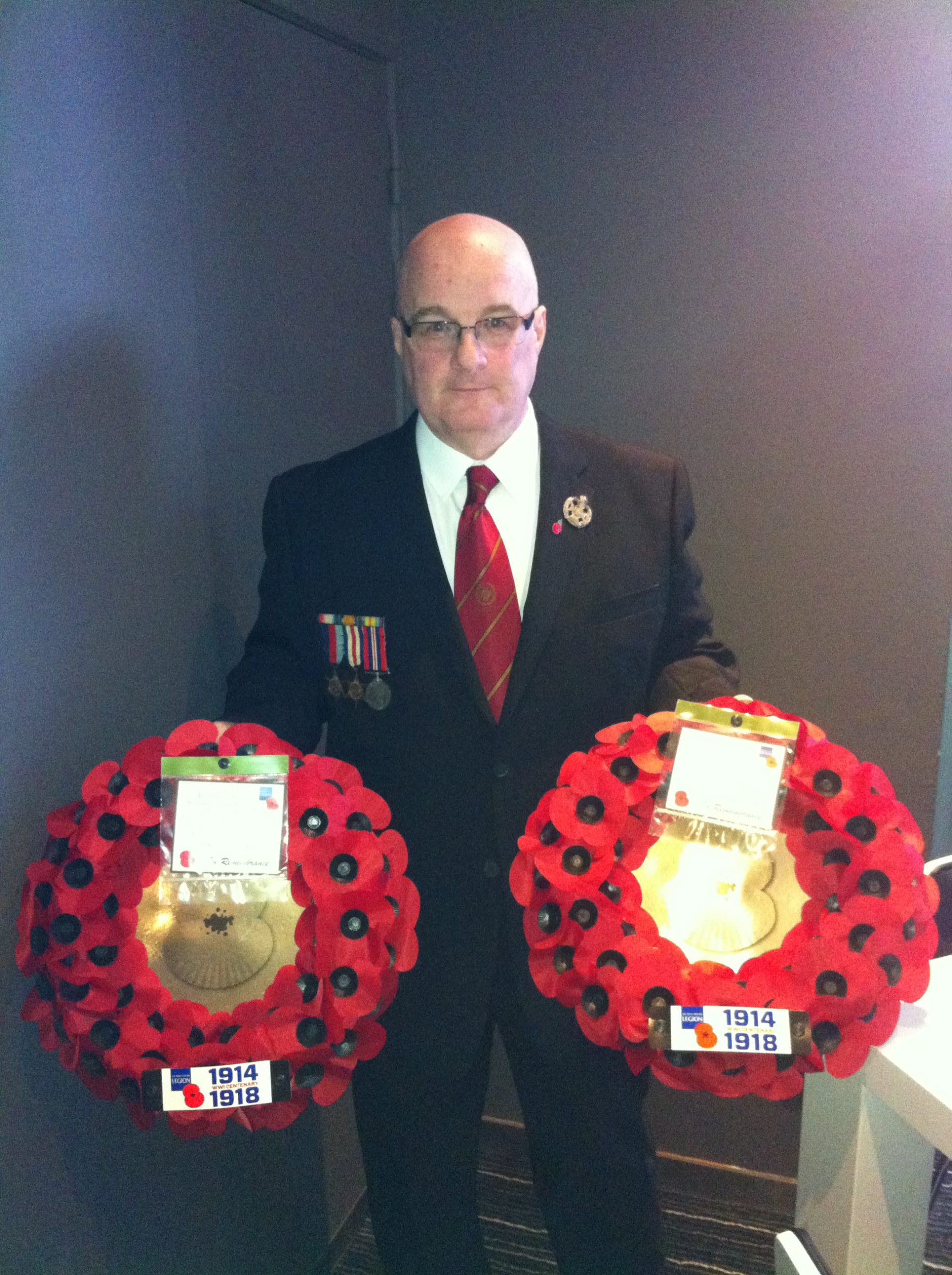 Part two of Paul Prendergast’s personal account of his emotional experience on the BattlefieldsÂ Flanders Fields – Britain’s Bastion on the Western FrontÂ tour.

We started off at 8.30am, our first stop was Hill 60. This was my first personal call of the day so when we got there I left the main group for about 10 minutes. This was due to me wanting to place a Cross of RemembranceÂ at the Queen Victoria Rifles Memorial on the hill.
This was in remembrance of Percy Kimmons, 6655 1/9 London Regiment, aged just 34 when he died on the on 09/10/1914. The significance behind this is that I have his Death Plaque and his medals at home. He was a Postman when he joined the Army. I was very proud to lay this small token in his memory.
On hill 60 we went to see the bunker on top of the hill and also you can walk round the craters on the hill which is a very odd feeling.

We then went on to the visit the Passchendaele Museum which has got some great exhibits, but also has a series of underground dugouts and trench systems that just give you a very small idea of how the trenches would have been but without the Death Blood Lice and Rats. We can never contemplate what actually happened to those men who walked through these to their deaths, fighting for our freedom today.
During the weekend we stopped at Ploegsteert or Plug Street to the British this is where Winston Churchill served during the War, also the place of the Xmas Truce. The weekend also included a visit to Bayernwald a series of German trenches and Bunkers that you can walk round, it is said that Hitler won his Iron Cross here.


We also visited Langemark German War Cemetery where there are 45,000 men buried this includes a mass grave containing 24.000 men buried together this includes some British men and the enemy, but now at rest with each other.
We then went on to visit Tyne cot cemetery which is the biggest CWGC cemetery in the World it contains, 12.000 men buried and 34.000 names on the memorial wall the scale of this makes you think what a waste it was .
When we got back on the coach it was mentioned that our cemeteries are better than the Germans, I could only say that ALL Men Are Equal in Death, and every headstone and name had a family and a story.
All the tours were fantastic and our guide Peter Williams, was without doubt a very good guide.
Now, at the start of this second part of my blog, it was said the tour was going to be a very personal and emotive trip for me. When we got back to the hotel, I had to shower shave, put on a shirt, tie and suit. The reason? I had the honour to be laying two wreaths at the Last Post Ceremony at the Menin Gate at 8pm on the 05/10/2014.
The wreaths that I was laying were for the 1/10 Service Btn Queens Royal West Surrey Reg (Battersea Pals). The reason for this is that I was born and raised in Battersea, London, SW11. I wanted to pay my respect to all the local men who fought so that I could have my freedom today.
The second wreath that I would be laying was for the 1/2 8th Btn London Reg Post Office Rifles. A very personal tribute this because I worked for Royal Mail for 38 years before I took early retirement this year.
Every sorting office that I have ever managed, and in the country, has a plaque dedicated to the men who fought and died in WW1 and WW2.
When I left Royal Mail my last office was Stockwell London SW9, the plaque in there has got 6 names of men that went to fight. None came back. This is where I got my interest in WW1.I was also wearing my Granddadsâ€™ medal for his RAF service in WW2 and my Great Uncles medal bar from WW1, I will also be wearing this when I march pass the Cenotaph on the 09/11/2014.

I arrived at the Gate around 7.15pm, it was packed already so I took my place in the line behind other people. There was 9 wreaths to be laid I was third in line for my first.
My first wreath was for the Battersea Pals. I started to walk and was struggling to find my thought at the honour that I had to lay the wreaths at the Gate. I reached the top of the stairs, laid the wreath, bowed my head and turned back.
Then I realised that I still had one more to lay for the Post Office Rifles, so I took my place at the back of the line. I had to walk alone to the other side to lay the wreath, a large crowd people waiting for me to do so.
I reached the top of the stairs laid the wreath and then turned and thinking about what these men did for us, I bowed and then started to shed tears the emotion was just too much.
I walked back and got myself back together, I was told by people on the tour that I did really well and assured that anyone would have gotten upset thinking about what these heroes went through.
I have now been on 4 Leger tours in the last 12 months and already have 3 booked for 2015.
This is by far for me my best trip yet and would recommend this Flanders Field Bastion on the Western Front to all people who want to visit.
The morning we left Ypres I walked down to the gate the sun was rising and I looked down on my wreaths with PRIDE and EMOTION. I thought, when I was at the gate, I was alone with 54.000 heroes. Not many people can say that.
Some people might read this and say that my account of this is very emotive, but however many times I visit these places, I will always remember the two wreaths laid at the gate and every time I visit a cemetery or memorial. That every name carved on a wall, headstone or cross, gave their lives for our today.
The 11th November will be here within the week so please wear your poppy with PRIDE, show our living Soldiers that they are not forgotten and remember, without them giving their lives you would not be here today.

14 Replies to “Part Two: A Personal Account of Visiting Battlefields in the Centenary Year”