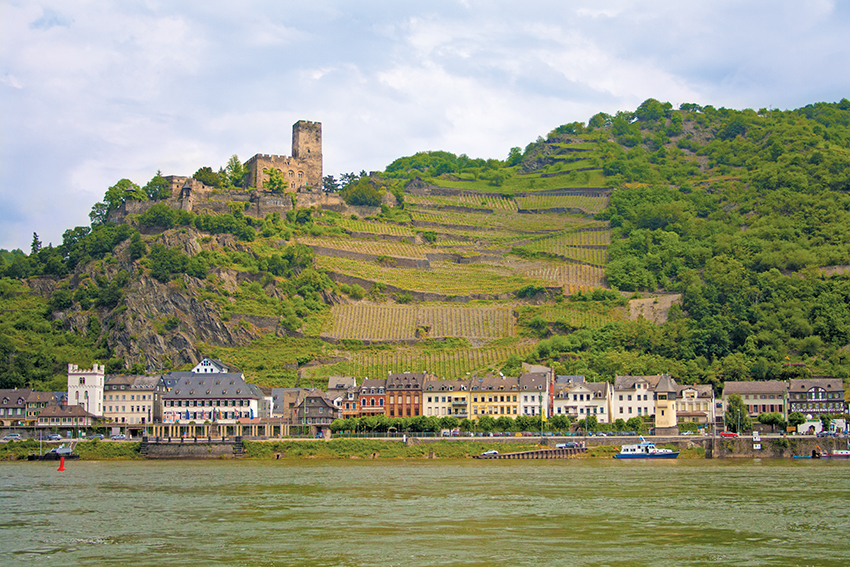 A day out on Legerâ€™s Romantic Rhine, Fairytale Castles of Bavaria and the Black Forest tour took us along just a small stretch of one of Europeâ€™s longest rivers, the mighty Rhine.

Pastel-coloured buildings of pink, green, yellow and mustard lined the banks of the river amongst clean white churches and half-timbered buildings, all looking like tiny matchboxes against towering hillsides. Above them, I noticed how the land resembled a patchwork of deep green corduroy â€“ stripes left to right, up and down â€“ as if it was a large blanket, holding the hills together. 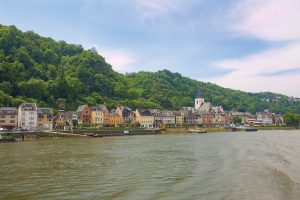 As we began sailing along the calm waters of the Rhine we passed one of the many castles which cling to the valley: Burg Maus â€“ â€˜Mouse Castleâ€™, with its distinctive round tower, sitting above the small village of Wellmich on the east side of the river.

Through the commentary on our ship we learnt that the castle â€“ official name, Burg Peterseck, and also known as Thurnberg â€“ was built by the archbishop of Trier to protect its borders against the Counts of Katzenelnbogen who had previously built a castle on the opposite side of the river: Burg Rheinfels. In response to the building of Thurnberg, the counts built a larger castle, the name of which was shortened to Burg Katz (Cat Castle), and, according to tradition, renamed the archbishopâ€™s castle Burg Maus (Mouse Castle), saying that Burg Maus would be eaten by their nearby Burg Katz!

A bit further along we passed the rather unusual Zur Klosterschenke â€“ a church which is attached to a pub! To get to the church you actually have to go through the bar. Here, the priest apparently serves at the bar when heâ€™s not covering his other duties. Thatâ€™s something Iâ€™ve never encountered before!

In Kamp-Bornhofen the two castles of Sterrenberg and Liebenstein stand high on the hill and hold a couple of interesting stories about two brothers from the 13th century. Legend has it that the brothers, who shared the castles, became enemies and a wall was built between the two structures. These castles â€“ one white and one black, seen clearly from the river â€“ are sometimes referred to as â€˜The Warring Brothersâ€™. 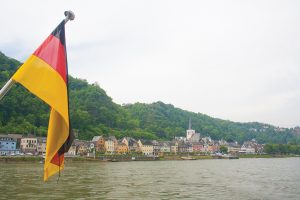 It was a beautiful, sunny day as we continued along the Rhine. Our party were sitting in deck chairs laughing and joking, enjoying a drink and a chat in the sunshine. It was so relaxing, just sitting there, listening to the commentary and taking in the scenery. Flags were flapping in the welcome breeze and everyone appeared to be having a great time. 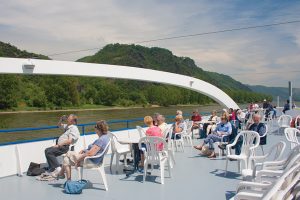 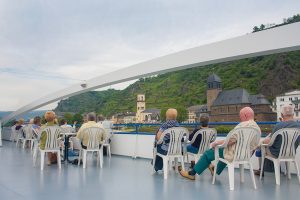 Off the ship and back on dry land in the lovely town of Boppard I enjoyed a short walk along the Rhine Promenade before we left for our next visit. Along the promenade people were walking their dogs while others strolled along, eating ice cream or pedalled past me on bikes. Baskets of red and pink geraniums lined the railings against the river adding a hint of colour to the view. 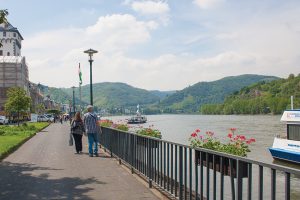 Leaving Boppard, our next stop was the small town of St. Goar (Sankt Goar). After a short walk along the edge of the Rhine, I was in the centre of town, and immediately spotted the cuckoo clock shop â€“ not hard to do since outside it displays the worldâ€™s largest free-hanging cuckoo clock. Behind the clock, up on the hillside I could see the Burg Rheinfels (one of the castles built by the Counts of Katzenelnbogen) which was apparently the largest castle on the Rhine until Napoleonâ€™s army came and blew it to bits! Today, while some of the castle is still in ruins, other parts of the building are a hotel and restaurant.

As I continued along the townâ€™s pedestrianised, central street, lined with souvenir shops, inviting cafÃ©s and kondotorei, I could hear the loud â€˜tick tockâ€™ of the ‘worldâ€™s largest free-hanging cuckoo clock’ following me for quite a distance. I spotted a few members of our party sitting at the cafÃ©s, enjoying an afternoon tea break: a pot of tea, a cold beer or a large ice cream.

Up in the quiet backstreets of St. Goar, the only sound I could hear was my own footsteps. The maze of cobbled streets lead me to a picturesque church, tucked up into the centre of the town, amongst old buildings and streets lined with colourful planters. Following the paths back to the main street, I sat beside a couple of men enjoying huge slabs of cake â€“ a strip of biscuit base holding orange sponge, pink mousse and topped with strawberries. Yum!

But there was no time for cake for me. The day had all-too-quickly come to an end and it was time to leave the lovely little town of St. Goar and the picturesque Rhine Valley after a wonderful, memorable day by the river.
Have you been to the Rhine Valley or experienced a cruise along the River Rhine? Have you been on Legerâ€™s Romantic Rhine, Fairytale Castles of Bavaria and the Black Forest tour? Share your stories with us.