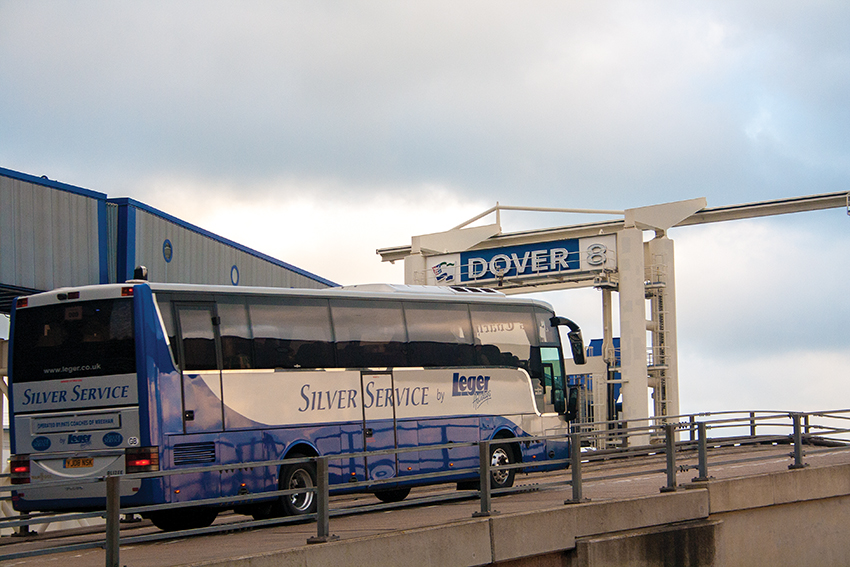 The interchange at Dover Eastern Docks often has Leger Holidays customers amazed: How on earth can luggage from sometimes up to 30 coaches end up on the right vehicle so quickly? How do so many people from so many different coaches from all over the country swap successfully to the right tour coach where their bags and belongings are waiting for them? But it happens. And the luggage handlers and coach crews make it all look so easy.

We thought the best way to explain what goes on was to spend a day at the port and put together a short film to share with those of you who have yet to experience the ‘smooth operators’ at Dover port… So, on a brisk November morning, Anita and I (Caroline) headed off ‘on location’, travelling from Yorkshire to the south-east coast of England to see this marvel for ourselves.

The sky was bright blue against the famous white cliffs, brightly lit by the autumn sunshine, as we passed through security and headed to the interchange.

Caroline: “Even though we weren’t actually going anywhere, we had to go through passport control and, because we would be filming and taking photographs around the interchange, we had to pass various security and health and safety checks – we even had a video to watch and questions to answer before we were allowed to proceed, escorted by a Dover Harbour Board security guard. They take security and passenger safety very seriously here.”

Despite the relatively mild temperature, the wind chill on the coast had us heading for our scarves and gloves in no time. Rob, our security guard for the day, made sure we were wearing our hi-vis vests before accompanying us around the interchange.

As each coach arrived, it was like watching a well-rehearsed dance sequence – each vehicle sweeping around into the parking area and gliding back into its designated bay, one after the other – all that was missing was some music.

Anita: “This was a relatively quiet day, as far as the interchange goes – we only had 7 coaches heading across the Channel. Our busiest time is July and August, when there can be 30 coaches lined up, ready to board the ferry.”

Leger guests poured off their feeder coaches and headed into the Passenger Services Building to enjoy a cuppa or stock up on essentials at the shop there, whilst the luggage handlers and coach crews set to work wheeling cases into position.


There were flashes of hi-vis jackets circling the coaches like the seagulls doing circuits of the sky above us, whilst the coach crews stocked their vehicles with supplies for the trip. In no time at all, cases had been checked, luggage had been loaded onto the relevant tour coaches and Sarah, part of Leger’s team at Dover, called over the tannoy for our guests to join their tour coaches.

The coach crews welcomed guests onto their vehicles, checking seat numbers and ensuring everyone was present. Once all the doors were closed, the convoy of blue and silver vehicles made their way over to the ferry boarding area and waited for the go ahead to board.

We waved off each coach as they disappeared up the ramp and onto the ship, wishing we were joining them on their European adventure.


By the way, have you ever wondered where the phrase “that’s a wrap” came from? Well, some say it’s an acronym for a phrase which originated in the 1920s when the director of a film used to shout “Wind Reel And Print” to signal the end of filming. So now you know!
The video can be viewed below:-