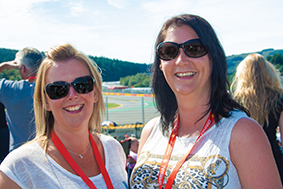 Mention â€˜Spaâ€™ to any girl, and thoughts of aromatherapy oils, body scrubs and hot stone massages spring to mind.


So, when we heard that the â€˜Spaâ€™ weâ€™d be visiting was Spa-Francorchamps â€“ the circuit of the Belgian Grand Prix, we realised it was time to ditch any ideas of a couple of days of relaxation in place of an adrenalin-pumping, motor racing weekend.
â€˜Starting gridâ€™… â€˜pole positionâ€™… â€˜chequered flagâ€™… â€˜Lewis Hamiltonâ€™… Before our weekend at Spa we both knew little more of F1 and the Grand Prix than these few words.
Swapping our â€˜day jobsâ€™ with Legerâ€™s Design Studio and Marketing teams, we were to join one of fourteen coaches heading to Belgium on the last weekend in August, accompanying the tour with a small film crew to learn more about the event and to make a short video to share with our customers on our website and our coaches.
Weâ€™d imagined we were going to be spending the weekend with a load of blokes, staring at a track and talking ‘lap times’, â€˜top speedâ€™ and â€˜bhpâ€™. â€œWhat’s the big attraction?â€ we’d asked each other before we went. We were soon to find out…

Caroline: “This trip was unlike any other Leger holiday I’ve been on, and I’ve been on quite a few. Our coach had such a mix of people: yes, there were the expected groups of guys, but also pairs of girls travelling together, couples and fathers with their sons. From the very beginning, people gelled and got chatting about their common interest: motor racing.”

On the qualifying day, we decided to get our bearings by taking a walk around the 7km track… little had we realised that the circuit at Spa-Francorchamps is set in the very hilly landscape of the Ardennes region of Belgium! As well as being good exercise for us all – particularly considering we were lugging loads of camera equipment around with us – it also gave us chance to suss out the best places to see the track for the main race on the following day.

Anita: “As soon as we got inside the circuit, it was clear to see who the regular race-goers were… they were so well prepared, with fold-up chairs, blankets to lay on (and stake their claim on their little square of grass!), picnic hampers, flasks and crates of beer! We were clearly novices at this – all we had was a KP Choc Dip to share between the four of us!”

Luckily, one thing we were prepared with was ear plugs!

Caroline: “The sound when we got closer to the track was louder than any of us had imagined. My ear drums were actually vibrating so much they tickled! We quickly developed our own sign language and the ability to lip read!â€


On the race day itself, the atmosphere was totally different to the day of the qualifiers. We’d commented on how ‘subdued’ it had seemed on Saturday, but on Sunday it was as though everyone had suddenly come to life! The grass banking was a sea of people – so much busier than Saturday – and folks were fully kitted out in t-shirts, caps, jackets and sweatshirts, all branded with their favourite team. There were huge flags waving, air horns sounding and even people dressed head to toe in Lycra chequered flag suits!
Our visit on Saturday meant we’d spotted a great position to see the track – one that was slightly raised and meant we could see the cars coming along the fast downhill stretch to the double-left at Pouhon, passing in front of us and then around the bend towards the quick, right-left Fagnes chicane. This viewpoint was much better than in the straights where, because of the speed of the cars, all you got to see was a flash of colour, and it was less crowded.

Anita: “It was here that we met up with some of our fellow travellers to film a short interview with them before the race began – they got quite a few looks from others around – I think they thought we were interviewing someone famous!”


The race hadn’t been going long when there was a spectacular collision at the first corner, putting Lewis Hamilton out of the race! So it was time to learn some other drivers’ names, and fast!
The cheers, air horns, flag waving and applause lasted throughout the 44 laps, with people watching the big screens in between the cars passing by or picking up commentary in hand-held devices.
We’d been told that the circuit at Spa almost has a climate of its own – on one side of the track the drivers can be negotiating the course in clear skies and bright sunshine, whilst on the opposite side it can be raining. This weekend, however, it was a hot, dry and sunny weekend – lucky for us!
As the 44th lap came and went and the race ended, there was a clear winner: the UKs very own Jensen Button had taken the lead right from the beginning – at one point having an 11-second lead!
As the crowds poured out onto the track, we hot-footed it back to the coach (as much as anyone can hot-foot it when they’re weighed down by cameras, tripods and microphones) in readiness for our gang returning.

Caroline: “As people came back to their coaches, it was clear to see they’d had a good time – still waving their flags and now, it seemed, decked out in even more F1 merchandise! Two of the ladies on our coach who had met up with their friends from one of the other coaches were wearing masks – the four of them had caused quite a stir, walking around as Mark Webber, Sebastian Vettel, Lewis Hamilton and Jenson Button!”

It was an excellent weekend and now we know what the big attraction is. It’s all about the atmosphere… being there, in the thick of it, amongst the crowds cheering and clapping as the cars make that ear-piercing ‘Eeeeeeeeeeeooowwwmm’ past you… you certainly don’t get all that by watching on telly!
And so, from ‘starting gridâ€™… â€˜pole positionâ€™… â€˜chequered flagâ€™… â€˜Lewis Hamiltonâ€™… what else had we learned?
Well, we know that Jensen Button won the 2012 Belgian Grand Prix. We also now know at least two other driver’s names (thanks to the ladies in their masks!). We know that Spa is one of the most challenging race tracks in the world. And we learned that one KP Choc Dip between four people is just not enough!
Caroline Thorpe & Anita Rodgers.

If you’ve been inspired by Caroline and Anita’s story you can book your place for next year’s Belgium Grand Prix now!