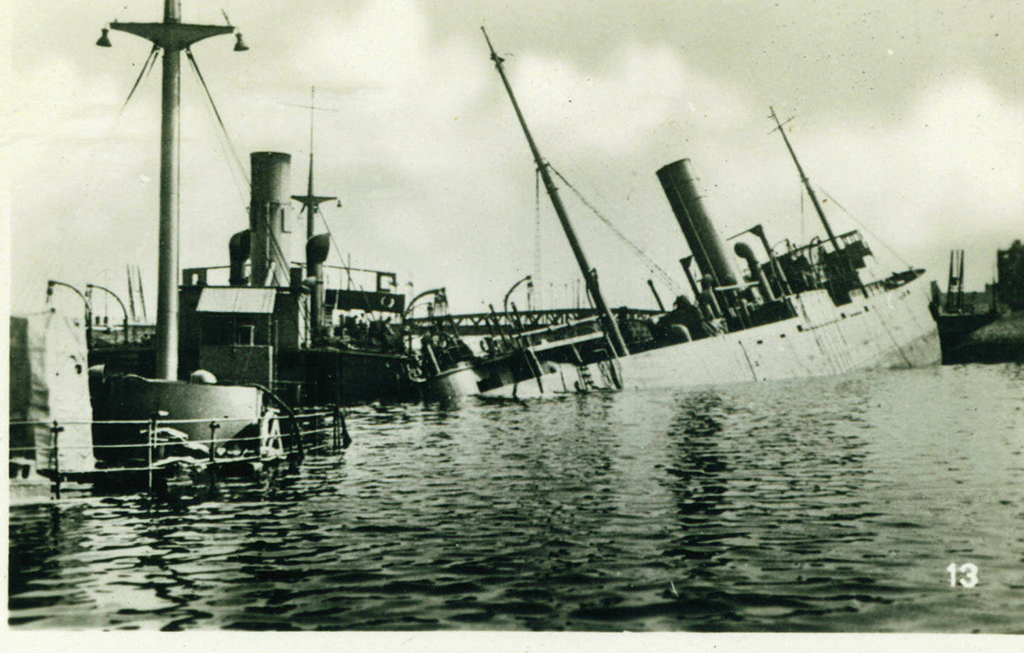 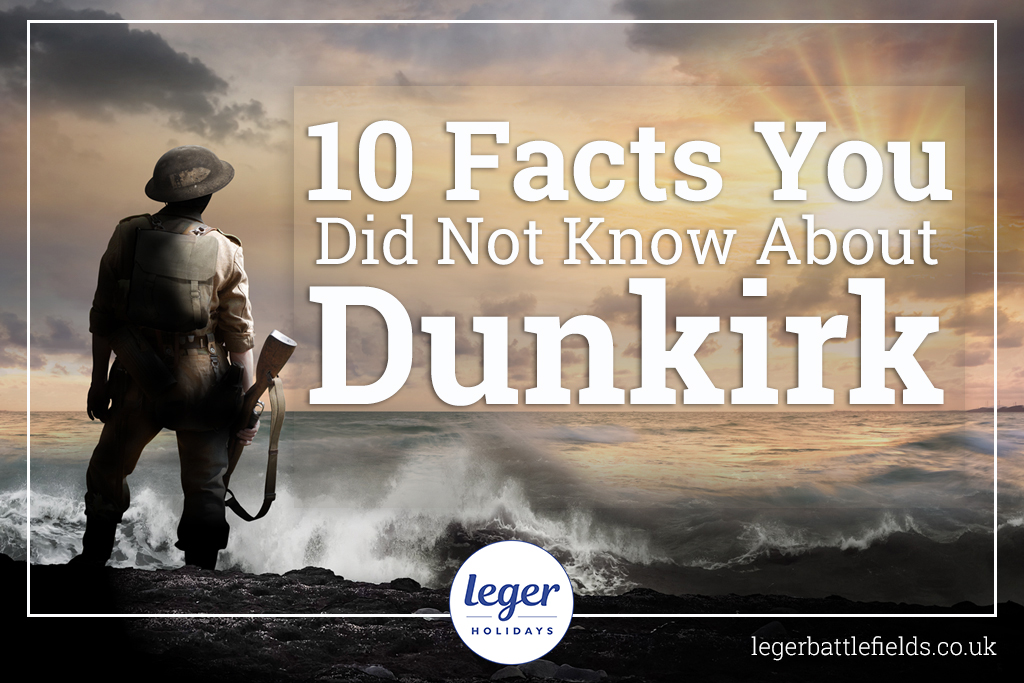 Here are 10 facts you did not know about Dunkirk…
1. The BEF were a Mix of Regulars and Territorials
Most of those who were in the Army in WW2 were conscripts, but the British Expeditionary Force (BEF) in 1939/40 was unusual in that it was largely a volunteer army. Regular soldiers were predominantly volunteers, and some had served for many years. A large proportion of the BEF were Territorial Army (TA) units and these were all volunteers: often referred to as ‘Saturday Night Soldiers’ as their role in the armed forces during peacetime was part-time. The size of the BEF in 1940 was estimated at over 300,000 men.
2. The Dunkirk Perimeter was Massive and Covered Two Countries
As the Allies pulled back across Northern France, a decision was made to defend the Dunkirk area to allow men to be evacuated. The defensive perimeter set up, largely along the lines of canals and waterways, which offered a natural barrier, extended more than 10 miles inland from the beaches and across 25 miles from Dunkirk town to Nieuport, in Belgium. The thousands of men defending these were therefore spread across both French and Belgian soil, in an area as big as the Ypres Salient battlefields of WW1.
3. It Was Not All About The Beaches
Of the 338,000 Allied soldiers evacuated at Dunkirk only a third of them were taken off the famous Dunkirk Beaches. While the popular myth remembers the beaches, most men were evacuated via the less glamorous ‘Mole’. This was a stone jetty that extended along the harbour mouth. The far end was wooden. The water either side of The Mole was deep so it meant that large vessels could come in, moor up and load very quickly. Ships were sunk here by bombs from German dive bombers, but it was a very effective method in getting the majority away. The Mole survived WW2 but was lost in a storm in the 1970s, although the stone sections remain. 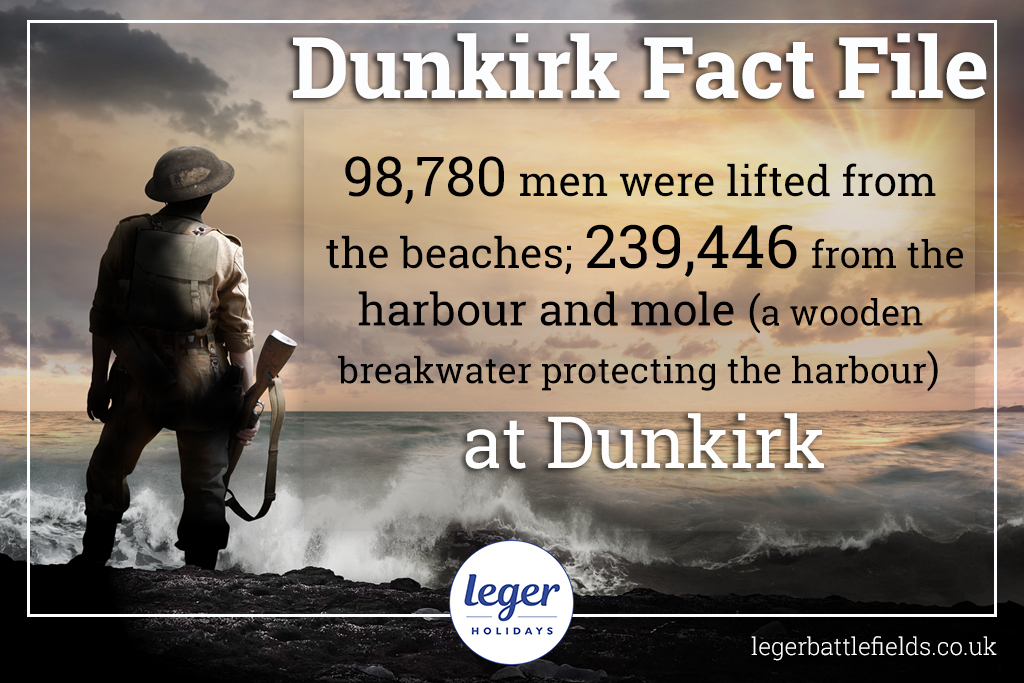 4. Not All the Little Ships were Little
More than 700 private vessels were requisitioned as part of Operation Dynamo. Many people believe that they were all small boats but the fleet of so-called ‘Little Ships’ included some quite large vessels. For example, the Isle of Man Steam Packet Company provided 10 of its 16 ships, which included substantial steam powered ones like the Mona’s Queen which weighed in at over 2,700 tons. This company’s ships alone rescued more than 26,000 men from Dunkirk, giving an insight into the importance of their role. Many Little Ships were lost and the wrecks of some can be seen on the Dunkirk Beaches to this day.
5. Lorry Piers Were Used to Get Men to the Boats
For the men who were evacuated off the beaches there were problems in that very few could swim. How to get them through deep water and onto a ship? An idea was developed to line up Lorries across the beach at the low tide, side by side, and put planking over the top. This turned the line of Lorries into an improvised pier at high tide, enabling those unable to swim to walk over the Lorries and board a ship out to sea. Many of the more than 100,000 men taken off the beaches used this method.
6. The Indian Army Was at Dunkirk
Britain relied heavily on the Commonwealth in WW2 but few Commonwealth troops took part in the 1940 campaign. However, several Indian Mule Companies were in France at this time, being used to re-supply the British Army. These men were evacuated via Dunkirk, but en-route passed the old Indian Army memorial at Neuve-Chapelle, from the First World War. Several Indian soldiers were killed making the sacrifice at Dunkirk truly multi-national.
7. The RAF were in the Skies Above the Beaches
Many of the soldiers at Dunkirk believed that the RAF had been pulled back to Britain to defend the mainland, and they had been ‘abandoned’ to their fate at the hands of the Luftwaffe. Recent research has shown that RAF squadrons were very active over the Dunkirk Perimeter, giving vital cover to the men on the ground. They were also flying sorties inland to attack the German’s Lines of Communication and troop movements.
8. The Medics Could Not Leave
There were many thousands of wounded at Dunkirk, some from defending the perimeter, some wounded in the evacuation, and many brought in having been wounded earlier in the Battle of France. A significant number were evacuated out via The Mole, where they could be more easily taken aboard ships on stretchers. However, some were so badly wounded that they could not be moved at all and a large number of personnel from the Royal Army Medical Corps volunteered to stay behind to care for them. This meant they were subsequently taken prisoner; most were not released until 1945, so spent five years as a prisoner of the Germans.
9. Many French Stayed Behind
One of the wartime myths of Dunkirk in occupied France was that British soldiers refused to evacuate their French Allies. This was used by the Nazi backed Vichy Government to demonise Britain. The reality was that nearly 140,000 French, Belgian and Polish troops were evacuated in Operation Dynamo. In addition over 40,000 French soldiers stayed behind at Dunkirk to keep the perimeter intact to the very last moment that the final evacuation took place. Their sacrifice helped save the British Army and should never be forgotten. 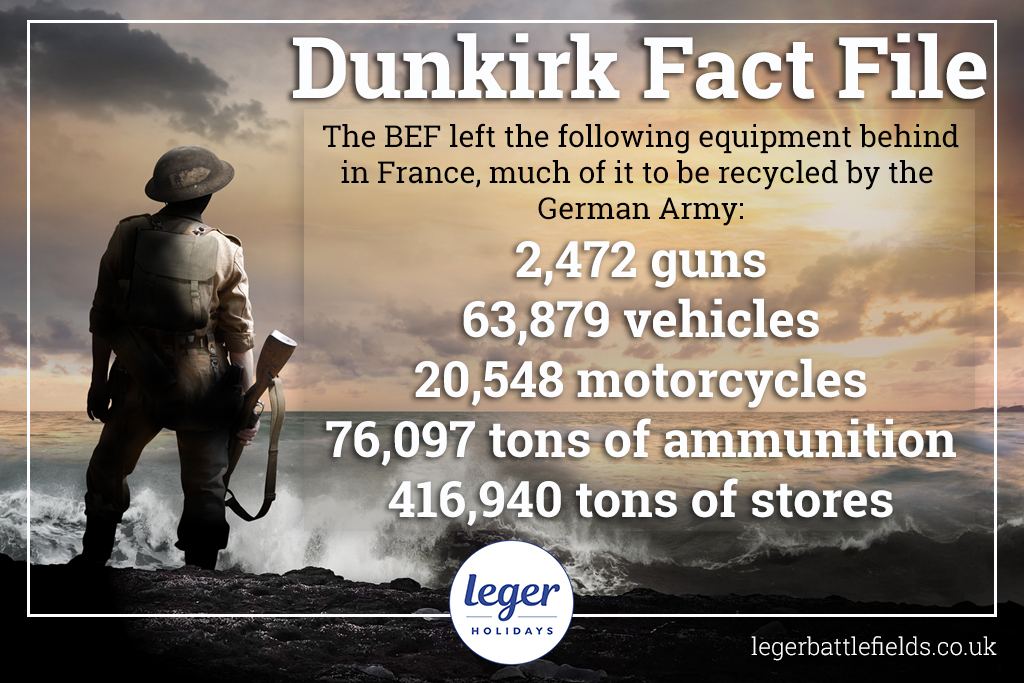 10. We Are Not Sure How Many British Soldiers Died at Dunkirk
As the British Army Retreated in May 1940, operational War Diaries and military papers were lost and destroyed. In the confusion of the retreat many soldiers got separated from their units, and when the final reckoning of casualties was made the War Office stated that 2,972 officers and 66,008 men were killed, wounded or missing from 10th May 1940 until the last day of evacuation in June 1940. This equated to about 1 in 3 of the BEF. The problem was that it was not known when many of these men died, or how many had actually died at Dunkirk. The cemeteries there have over 1,000 burials from the Dunkirk period, but many graves show dates of death as 10th May 1940 to a date in mid-June.  So we will probably never know what the true cost of the ‘Miracle of Dunkirk’ was.
Find out more about the real Dunkirk and visit the beaches yourself alongside an expert guide on our Dunkirk and Fortress Europe tour.